Yeonpyeong on the ready for attack

Yeonpyeong on the ready for attack 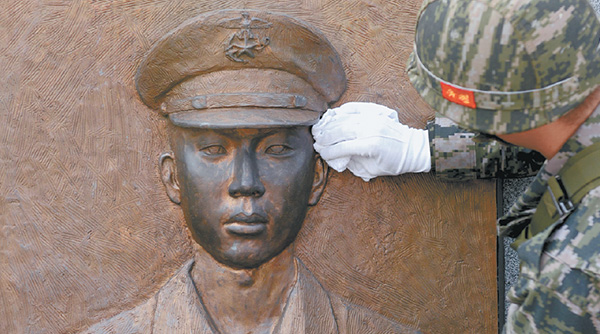 A marine cleans a sculpture of staff sergeant Seo Jeong-woo, who was killed in the North’s Yeonpyeong Island attack on Nov. 23, 2010, on Monday at Pyeonghwa Park in Yeonpyoeng Island. [NEWSIS]


YEONPYEONG ISLAND - On a recent visit to Yeonpyeong Island in Ongjin County, Incheon, ahead of the second anniversary of the North’s shelling of the island today, a placard hung in front of the military base entrance.

On a white background, written in black letters was: “Let’s not forget the Yeonpyeong Island battle, let’s punish the enemy’s provocations.”

Today marks two years since the North’s shelling of Yeonpyeong Island. Over those two years, the South Korean military has built up strength in the area in case additional provocations are made by Pyongyang.

The attack, which was the first on South Korean territory since the 1950-53 Korean War, killed two Marines and two civilians. It also injured 19 others.

In preparation for another attack by the North, black-colored drum barrels have been deployed from the base headquarters to the gun platform.

“We installed drum barrels so that soldiers are able to safely relocate themselves from the headquarters to the gun platform [to attack] in case of war,” said an official from the Marine Corp.

“The barrels are there to protect the soldiers’ lives.”

From early this year, the Marines made trenches in front of each unit on the island by using 4,000 drum cans filled with sand and also 300,000 sandbags.

According to military officials, more tanks and artillery have been placed within easy range of North Korea. Additional weapons have also been deployed on Yeonpyeong so that the military can quickly respond and strike back if they are attacked by the North.

As for the overall atmosphere of the island, though it still has a long way to go until it fully emotionally recovers from the attack, military officials and Marines seemed proud and confident.

Officials said that the soldiers feel more proud ever since President Lee Myung-bak made an unprecedented visit to the island on Oct. 18 and told military officers that “South Korea counteracted well [against the North].”

He also said that the battle ended with the South victorious.

“I’m proud of serving on the tensely guarded island and will retaliate if there is another provocation from the North,” said Kim Bo-ram, a 20-year-old corporal. “We are fully prepared. If the enemy provokes again, we will grind them into powder.”

On the other side in the North, officials here say that the communist regime has also reinforced its coastal artillery gun positions near bases close to the tense sea border, ever since its leader Kim Jong-un visited Mu Island, where the unit that fired on Yeonpyeong is based. Kim also told the military to be vigilant and ready to lead a “sacred war.”

South Korean military officers were also able to notice some 100 workers being placed in the area near the border in the North to work at a construction site of a new building.

In the meantime, South Korean defense minister Kim Kwan-jin said yesterday that North Korea may launch provocations before or after the Dec. 19 presidential election.