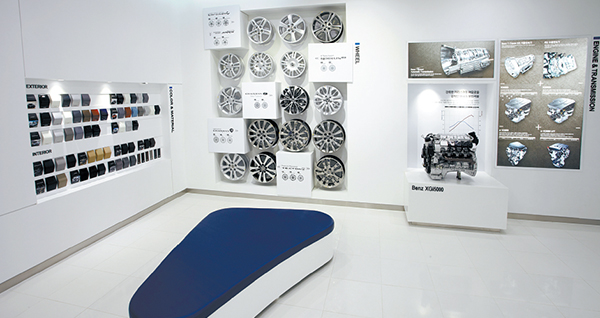 Engines and wheels used in Ssangyong Motor’s vehicles are shown at the company’s flagship “W-Lounge” in Daechi-dong, southern Seoul on Thursday. The automaker plans to introduce similar stores in other regions. Provided by the company


Ssangyong Motor is moving to establish a premium image after setting up a flagship store in Daechi-dong, southern Seoul.

“As a landmark for Ssangyong Motor’s sales network, the launch of the W-Lounge is very significant,” said Lee Yoo-il, the company’s CEO. “We will continue to strengthen our sales capability by building a stronger network nationwide focusing on premium value.”

The first W-Lounge will serve as a promotional hub for the automaker in the competitive Gangnam District in southern Seoul, where many foreign and domestic auto brands are concentrated.

The flagship store, situated on a 468-square-meter (5,040-square-foot) site, features a zone to promote auto parts, a communications lounge with tablet PCs and a media lounge. It also operates a service plaza where customers can have their cars repaired or checked.

At a test-driving center nearby, customers can make reservations to test drive new vehicles before deciding on whether to buy.

The automaker, part of India’s Mahindra Group, said it plans to open similar stores and services in other major metropolitan areas at special dealerships.

The number of regular dealerships increased from 143 last year to 152 as of last month, and will grow to 170 by the end of 2013, Ssangyong said.