A design language all her own

A design language all her own 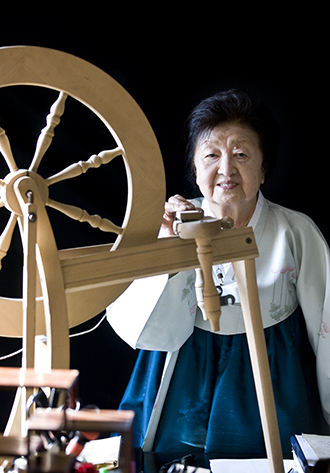 Bae Man-sil, a veteran interior designer and former professor at Ewha Womans University, stands beside a spinning wheel at her house in Pangyo, Gyeonggi. By Kwon Hyuk-jae

From major hotels in Seoul to a government complex and the N Seoul Tower on Mount Namsan, Bae Man-sil, a veteran interior designer, has added her personal touch to major architectural landmarks in the capital over the last 50 years.

The 89-year-old designer, who founded the Department of Decorative Arts at Ewha Womans University, recently published a book featuring a collection of her works.

Bae is known for introducing a fresh concept to the design world in the 1970s: adding gardening elements to interior design. For example, at the main cafeteria of the government complex in Seoul, tables are divided by plants at Bae’s insistence. “I thought it seemed so dreary to have rooms with no flowers in them,” she said.

Bae grew up in Jiandao, in the Yanbian Korean Autonomous Prefecture in northeast China. Her grandfather was an independence activist. After graduating from Ewha as an English literature major, she married a surgeon in 1940 and raised four children. When her husband fell ill, Bae became the breadwinner of the family. Her husband supported her career aspirations, however, and encouraged her to leave for the United States to continue her studies.

On a scholarship provided by the U.S. Department of State, Bae studied industrial art at the Art Institute of Philadelphia. She grabbed the attention of the local media as a Korean student with four children. Eleanor Roosevelt, then first lady and wife of Franklin Roosevelt, read an article about Bae and invited her to meet. “I hope you utilize what you have learned here when you go back to your country,” she reportedly said.

Returning to Korea in 1961, Bae got a teaching job at Ewha. “It was my golden time,” she said. “I met my students, including Lee Sung-soon, the chair of SOMArts Cultural Center, and Cho Jung-hyun, a professor of ceramics.”

She then went to New York to do a master’s degree at Columbia University.

She continued teaching at Ewha until 1988. After retiring, Bae ran the Total Design Academy from 1991 to 1997.

“The hardest time for me was during the Korean War,” Bae said. “There were too many widows who lost their husbands to the war.” Bae recalled her memory of fleeing to Daegu, Masan and Busan on a train.

Returning to Seoul in 1953, she taught dressmaking to widows so they could make ends meet.

In 1969, Bae was in charge of interior design at the Chosun Hotel. She highlighted Korean traditional beauty at the entrance of the hotel. On the walls of the hotel’s cafe, she displayed dolls in hanbok performing traditional ceremonies.

In cooperation with famous architects of the time, such as Kim Soo-geun, Kim Hee-chun, Eom Deok-moon and Lee Hee-tae, Bae carried out interior design work on some of the buildings they created.