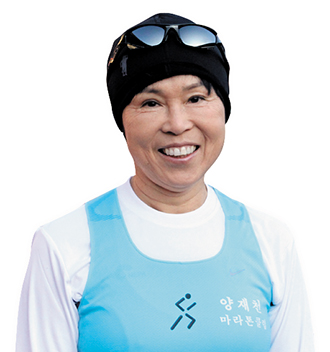 Interpreter Lee Sang-sook, 58, recently sent an e-mail to 80 of her acquaintances, colleagues and friends seeking donations to build a school in Laos if she completes a full 42-kilometer (26-mile) marathon.

On Nov. 18, she completed a half-marathon called the 2012 Son Kee-chung Peace Marathon.

She started participating in such events in 2003 to raise money for charity and has so far collected about 50 million won ($46,000). She gave the money to World Vision, a relief agency, for use in a total of eight projects. One built study rooms for students in Taebaek, Gangwon. Another helped rebuild a community wrecked by a typhoon in Vietnam.

Lee, who has been working as an interpreter for 30 years, formerly served as chair of the Korean Association of Translators and Interpreters. She has covered numerous international events, including the inauguration of former presidents Kim Dae-jung and Roh Moo-hyun.

She said running has kept her young. “I think I have more stamina than young people,” she said.

In 2010, she competed in the JoongAng Marathon to help raise money to sponsor a rehabilitation facility for disabled teenagers in Mongolia. Despite injuring her ankle during the race, she still completed it and raised 8.4 million won.

“That was the most I’ve raised in one race,” she said.