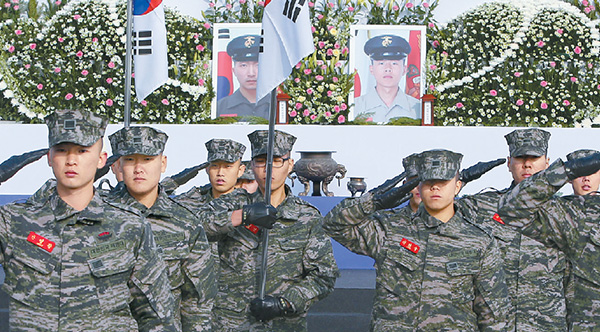 Marines at the War Memorial of Korea in central Seoul pay tribute to soldiers who were killed by North Korea’s attack on Yeonpyeong Island during a ceremony yesterday to mark the second anniversary of the incident. [YONHAP]

“At that time, we were not able to confirm in detail the full extent of damage caused to the North Korean military, but through various channels, [South Korean] intelligence was able to find out that 10 [North Korean soldiers] had died and around 20 were seriously or slightly injured,” an intelligence official told the JoongAng Ilbo.

Citing local North Korean defector groups, there have been unconfirmed reports that there were between 20 and 40 casualties, but this is the first time that the Seoul government has officially confirmed the extent of the damage in the North.

“There were a lot of casualties on the North’s Mu Island where our Marines attacked after the island was shelled by North Korea,” the intelligence official said.

“We think that the area wasn’t prepared when it was attacked, which is why there were many casualties.”

The official also added that “in a satellite photo at the time, [South Korean officials] were able to find traces of the artillery attacks on some of the military buildings on Mu Island.”

Four South Koreans were killed and 19 others were injured.

The North’s newspaper, Rodong Sinmun, had also reported on April 30, 2011, that “Our soldiers are bleeding because of our enemy’s shells. Should we just sit here [and do nothing]?”

Marking the second anniversary of the North’s attack, however, the Rodong Sinmun argued differently in an editorial claiming that the North won the battle in a “victory of justice.”

“There were no sacrifices and no wounded among our soldiers fighting on the southwestern front line,” the propaganda mouthpiece for the North’s ruling party wrote.

“[North Korea’s leader] Kim Jong-un had visited Mu Island in August and inspected the artillery unit responsible for shelling Yeonpyeong Island and extolled the service members as heroes,” said a South Korean military official. “It would be an insult [to Kim Jong-un] if the editorial had said the North had been damaged.”