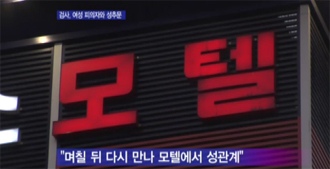 The chief of a local prosecution office offered to resign Friday following revelations a trainee prosecutor under his supervision participated in sexual acts with a woman suspect during questioning.

The 30-year-old trainee prosecutor, whose name was withheld, was found to have performed sexual acts in the office with the suspect in her 40s while questioning her over an alleged theft and other charges earlier this month, according to inspectors at the Supreme Public Prosecutors' Office (SPO).

Four days later, he took the woman to a nearby motel where they had sex.

Seok Dong-hyeon, chief of the Seoul Dongbu District Prosecutor's Office where the junior prosecutor was working, said in a message on the prosecution's intranet that he is going to step down to take responsibility as head of the office.

The case added further woes to the prosecution as it came on the heels of a massive bribery scandal centering on allegations a senior prosecutor took hundreds of millions of won from the mastermind of South Korea's biggest-pyramid scheme, and a mid-sized conglomerate.

That prosecutor has been arrested.

The Supreme Prosecutor's Office has launched an internal probe into the sex case to determine the details of the incident and whether the sexual acts were in exchange for other favors.

The junior prosecutor claims the sex was consensual, according to investigators.

The trainee will be questioned over whether he forced the suspect to have sex with him or demanded it in return for favors in investigating the allegations against her, they added. (Yonhap)