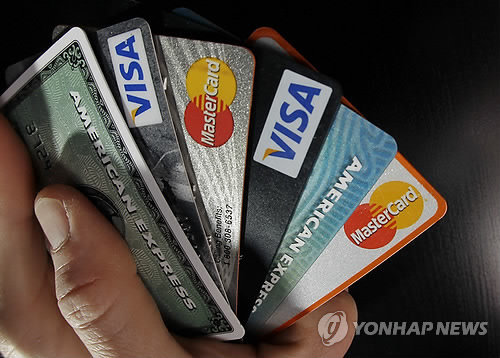 The average number of credit cards held by South Koreans declined in the first half of 2012, related data showed Saturday, apparently due to the protracted economic slowdown and stricter government regulations.

The country's economically active population held 4.5 credit cards on average as of end-June, according to the Credit Finance Association. This compares with 4.9 tallied at the end of 2011.

South Korea's economically active population, or the number of people aged 15 years and above with the willingness to work, totaled 25.84 million at end-June, down 2.9 percent from 25.09 million tallied as of the end of last year.

The number of unused credit cards reached 23.8 million as of end-October, which translates into 92 percent of the country's economically active population holding one dormant plastic card.

Dormant credit cards refer to accounts without transaction records during a 12-month period.

Meanwhile, debit card spending has been expanding rapidly this year in South Korea, with the amount rising by 1 trillion won each quarter for the past nine months, industry data showed.

Purchases made with debit cards totaled 39.5 trillion won (US$36.3 billion) in the January-June period this year, up 21.98 percent from 32.4 trillion won during the same period a year earlier, according to the data.

Credit and debit card use by private consumers reached 65.3 percent of total private spending in the first half, up 3.3 percentage points from a year earlier, the credit association added. [Yonhap]