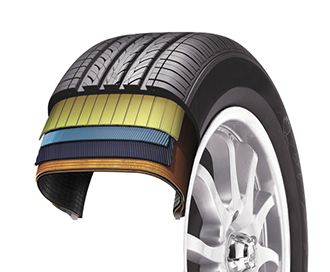 Korean tire manufacturers are moving to cope with a new labeling system emanating from the European Union as the global industry is being thrown into turmoil by a series of similar regulations that are designed to keep consumers better informed and protect the environment.

Starting this month, the EU is enforcing a new ordinance that require manufacturers and retailers to display braking distances in the wet, fuel efficiency and external rolling noise on all of their tires produced after June 30 this year.

Fuel efficiency (rolling resistance) and safety (wet grip) are categorized using an A to G scale of colored bands, with A being the highest, while the noise generated while driving is given in decibels under the new EU regulation.

Such labeling systems have become a global trend as countries become more environmentally aware. According to Lanxess, a German chemical company that provides high-tech rubber to tire manufacturers, the market share of class A and B tires is expected to reach 20 to 30 percent in 2017, and then jump to 70 or 80 percent in 2022 in Europe alone.

Korea is also ready to introduce a similar labeling system to the one now in force in Europe. After Japan started encouraging companies to voluntarily provide such labels in January 2010, Korea followed suit last November. It is set to introduce a mandatory labeling system next month. Unlike the EU regulation, however, the local system will not include rolling noise.

Brazil, the United States and China reportedly intend to adopt similar systems in the near future.

Experts say such labeling systems will change the playing field in the tire industry as consumers become more aware and savvy.


According to research carried out by the Society of Motor Manufacturers & Traders, a top-ranked A-grade tire can be up to 30 percent safer and 7.5 percent more fuel efficient than a lowest-ranked G-grade tire.

“We consider the tire labeling to be a real breakthrough in providing standard performance data to motorists in the interest of improving road safety,” Tiremaker Continental said in a recent statement.

Under the EU’s new system, some products from global manufacturers like Michelin, Goodyear and Pirelli are seen as underperforming compared to other lesser-known brands.

The share of non-European manufacturers in the region’s 47 billion euro ($60.2 million) tire market rose to a record 23 percent last year, up from 20 percent in 2007, according to the European Tire and Rubber Manufacturers Association.

Many experts expect the companies’ market shares in the future will depend on how quickly they can produce better-rated tires. At present, no tire maker is mass-producing double-A-rated tires in Europe, although top players like Pirelli, Bridgestone and Michelin have already developed high-level products.

Korean tire manufacturers say they are not only ready to enter the new era but see the new system as a springboard to step up in the global market with their double-A-rated products.

The company also expanded its Europe Technical Centre (ETC) after inaugurating new facilities in Hanover, Germany. The Ventus S1 Evo 2 was developed by ETC in cooperation with its R&D headquarters in Korea.

“Because of the recent economic slowdown, European consumers are looking for a product that offers good quality at a reasonable price,” an employee from Hankook Tire said. “We hope the labeling system creates an opportunity for European consumers to evaluate our products’ quality.”

“European consumers are much more sensitive to the environmental aspects of a product, and we have spent years making efforts to satisfy them,” said Cho Chun-taek, head of the Kumho Tires Research Center.

Experts predict the tire makers will invest much more in R&D in the future to satisfy customers’ needs as they aim to strike a balance right between conflicting laws of physics. In making better-rated tires, the challenge is to improve friction for braking while removing friction to improve rolling resistance.

“It is true that fuel efficiency improves on better-rated tires, but at the same time, there could be reduction of durability and driving stability,” said Lee Ho-guen, an automotive engineering professor at Daeduk College.

“If they make tires that satisfy fuel efficiency, durability, sound, wet grip and all those important criteria, the price could be very high.”