Artist blurs line between the mechanical and the living

Artist blurs line between the mechanical and the living 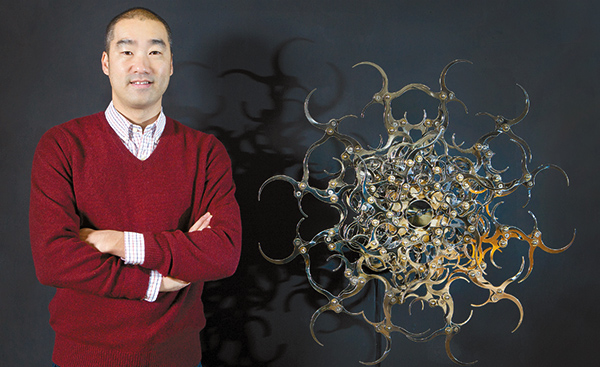 U-Ram Choe with his kinetic sculpture “Cakra-2552-A” at his studio in Yeonhui-dong, central Seoul. By Park Sang-moon


Science fiction and fine art may seem to be far apart, but the ongoing solo show of kinetic artist U-ram Choe at Gallery Hyundai in central Seoul will fascinate sci-fi fans as well as art lovers.

Visitors to the dark B1 room of the gallery, located in the art zone east of Gyeongbok Palace, will encounter a 3.6-meter-long (11.8-foot) metal monster lying on the ground. It looks like a skeletal seal “breathing heavily,” as viewers say. Tall, swaying metal plants appear to be growing on the creature’s back.

Actually, it is a kinetic sculpture titled “Custos Cavum” made by Choe in 2011. The metal coils covering it like an exoskeleton move up and down so smoothly by computer-controlled motors that it really does look like it is breathing. The feather-like ends of the metal plants on its back, which the Seoul-based 42-year-old artist calls “winged spores,” also move delicately as if alive.

That’s why Kim Chan-dong, an art critic and member of Arts Council Korea, wrote in the book “100.art.kr” that Choe “goes beyond kinetic art, making sculptures that may best be described as mechanical organisms.” The English-language directory of 100 up-and-coming Korean artists was published jointly by the council and the Culture Ministry early this year.

“Custos Cavum” has its own tragic mythology, according to Choe.

Once upon a time, this world and an otherworld were connected through a number of small holes. For each hole, there was a “Custos Cavum,” which literally means “guardian of the hole” in Latin. The creatures would gnaw the holes, to prevent them from closing up. When new holes would open up, the creatures would give birth to the spore-like creatures Choe calls “Unicus.” A Unicus would fly to a new hole and grow into a new Custos Cavum. But as people in this world came to forget the otherworld, the guardians of the holes also died off. Accordingly, all the holes closed up, and the two worlds were completely separated from each other.

“I was inspired from Antarctic Weddell seals, which gnaw at breathing holes in the ice; their behavior looked to me like connecting two different worlds - the worlds above and below the ice field,” said Choe. “I saw them in a nature documentary. Such documentaries as well as sci-fi animation and movies are important sources of inspiration for me.” 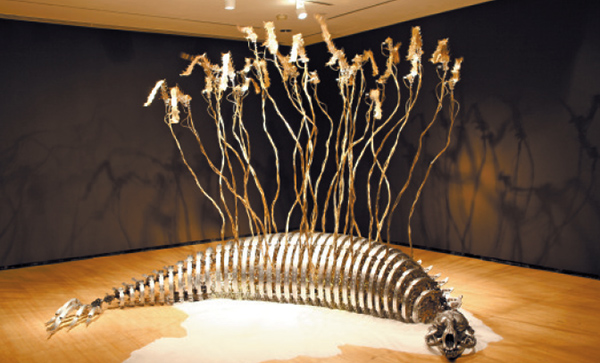 The 4.2-meter-high cable sculpture “Scarecrow,” which spreads its wings like a dark angel, and 3.6-meter-long metal sculpture “Custos Cavum” are part of Choe’s solo show going on until Dec. 9 at Gallery Hyundai in central Seoul.Provided by Gallery Hyundai


So some viewers could associate the mythical story with concerns about seals that are threatened by global warming. The artist gives scientific names in Latin to many of his kinetic sculptures and tells serious stories about them as if they were prehistoric creatures or extraterrestrial life he has discovered.

“I give them Latin names not only to give the impression that they were really alive,” Choe said last week at his studio in Yeonhui-dong, central Seoul. “With the names, I also intend to make it hard for the viewers to quickly define my works from the titles. So they face my works with an open mind and free imagination.”

His three-story studio was filled with machine parts and tools, just like a small factory. And staff members of his studio were busily going up and down the stairs. “There are eight people in this ‘United Research of Anima Machine,’ in abbreviation, URAM, including a programmer and a technician who are indispensable to this laboratory,” Choe said.

“And our boss is my wife,” he added, laughing. His wife, Young-hee, manages the studio’s budget and talks with overseas curators and collectors so her husband can focus on his art. Young-hee, who majored in sculpture, is also his most important adviser concerning new works and their installation, he said.

On a wall of the studio hangs his 2008 sculpture “Cakra 2552-A.” It is an assemblage of metal curlicues that rotate to make an ever-changing intricate and beautiful figure. The smooth, continuous changes of the figure are hypnotic and “based on Buddhist mandala,” Choe explained.

The sculpture inspired by mandala, which is Sanskrit for circle, could be paired with another sculpture, “Ouroboros” (2012), displayed on the second floor of Gallery Hyundai as part of his solo show running through Dec. 9. The kinetic sculpture depicts a serpent continuously eating its own tail, a figure used by ancient Egyptians and Greeks as the symbol of an eternal cycle.

In this way, Choe’s works encompass mythologies and philosophies of the East and West and cross the borders between machines and living organisms to create his ecology carrying his own fables. 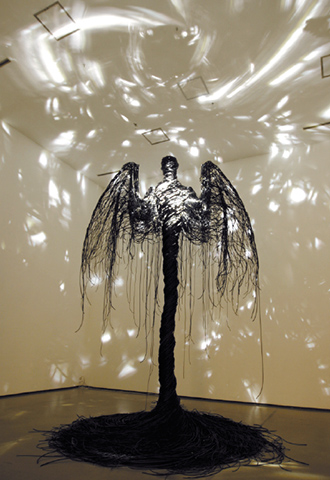 Choe’s latest works among the exhibits, such as “Merry-Go-Round” on the gallery’s first floor and “Scarecrow” on the second floor, show somewhat different characteristics from his former works.

His former “mechanical organisms” had exposed intricate metal parts, contributing to their grotesque beauty. However, machine parts are hidden from the viewers for “Merry-Go-Round,” which looks like just a pretty miniature or music box, and the 4.2-meter-high cable sculpture “Scarecrow.”

Still, kinetic qualities are important for these works. Once a viewer approaches “Merry-Go-Round,” which slowly rotates with faint music, a sensor activates a program that makes it rotate crazy-fast with music getting louder in about two minutes.

And “Scarecrow,” which is frightening for crows and humans alike, repeatedly spreads and furls its wings like a dark angel. Illumination from inside its body makes ominous shadows on the ceiling and walls.

Choe talked about them with the Korea JoongAng Daily at his studio.

Q. Would you explain about your new works and their differences from your former “mechanical organisms?”

“Merry-Go-Round” looks beautiful and romantic at a glimpse, like social statuses that people want to attain. But once you ride it, you will have to hold onto it as it rotates at a terrifying speed. I intend for viewers to feel scared about the rotating speed of the “Merry-Go-Round,” which evokes the speed of modern society. You know that people, especially Koreans, are using 120 percent of their energy to run and run.

As for “Scarecrow,” it has the body made of cables that symbolize networks. Most of us are using social network services and information about us is exposed to the networks. So the “Scarecrow,” a mass of networks, is a kind of archangel that looks down on pretty much everything about us.

Basically, I’m not negative about the era of open information. As you know, Korea was once a society where much information was closed and hidden from the public. I believe the society where information cannot be hidden has more positive than negative effects. Still, it has somewhat scary sides. So the “Scarecrow” looks scary.

In the visual aspect, I have put down my obsessive love for mechanical intricacy and hid machine parts from the viewers.

What caused you to make such a change?

Well, since I took the job as professor of art at Korea National University of Arts last year, I have talked a lot about art with students. It has helped me become more flexible and open-minded. In the future, I might even make works that are not kinetic.

In addition, conversation with the students has led me to think more about social issues and our reality. It could be inevitable that my initial interest in organisms and ecology, as well as in machines, develops into an interest in people and society, as humans are also organisms.

The exhibit includes a painting of a robot you made when you were 7 years old. So, your childhood has influenced your oeuvre?

Yes, so has my family background. My grandfather, an engineer, participated in the development of “Sibal,” Korea’s first domestically manufactured automobile. And my parents majored in fine art.

And after I was grown up, one day I felt that running automobiles were just like a herd of buffalo running wild. And when I lived in Gangnam District [southern Seoul], I saw new buildings under construction rise higher every day and felt as if they were growing organisms. This led me to combine machines and organisms in my work.

I would love to, but I have not yet received any offers from sci-fi movie producers or directors.

But a music video featuring my work is being made by a New-York-based avant-garde musician and composer, Bora Yoon, and an American director who specializes in filming modern dances.

It will be released as early as mid-December and perhaps through Vimeo (a U.S.-based video-sharing Web site).