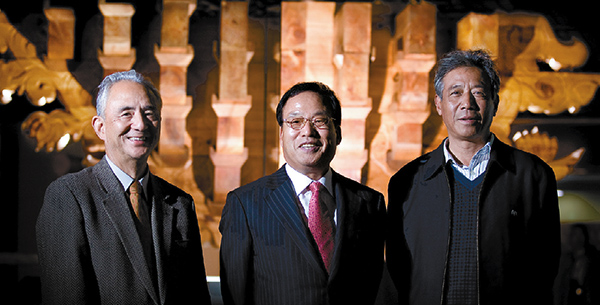 Chief carpenters from three countries in Northeast Asia - (from left) Ogawa Mitsuo of Japan, Sin Eung-soo of Korea and Li Yongge of China - convened to share their experiences and visions for traditional wooden architecture. By Kwon Hyeok-jae


Korea, Japan and China have many things in common, one of them being their long history of wooden architecture.

For thousands of years, the three countries have built wood structures, and they all had “chief carpenters” who oversaw the process. These master architects have passed down their techniques and know-how from generation to generation to the present day.

In a rare rendezvous, the chief carpenters of Korea, Japan and China have gathered in Suwon, Gyeonggi. They have come to celebrate the opening of a special exhibition at the Suwon Hwaseong Museum dedicated to the wooden architecture of the three countries titled “The World of Chief Carpenters in Traditional Wooden Architecture in Korea, China and Japan.”

The museum has dubbed the gathering of Sin Eung-soo of Korea, Ogawa Mitsuo of Japan and Li Yongge of China as a “5,000-year rendezvous” as there is no record of the chief carpenters from the three countries ever having met in one place.

“It’s such an honor to meet people who do the same work as I do in neighboring countries,” Sin said.

Ogawa also expressed his gratitude. “Wooden architecture came from China through the Korean peninsula to Japan. So I guess I could say Sin and Li are my teachers,” he said.

Sin - who is 71 years old and designated by the state as Intangible Cultural Heritage No. 74 - started his career in carpentry at the age of 17.

“I still remember very vividly how I tried to mimic my teacher [Yi Gwang-gyu],” Sin reminisced. “I would cut the wood in accordance with the lines, angles and measurements given by the teacher and plane the wood until I got blisters and callus on my hands.”

In 1975, Sin got his first big break. He was named master builder of the restoration project for the Jangan Gate of the Hwaseong Fortress.

Later, he was in charge of the repair and restoration of some of the most important wooden structures in Korea like Changgyeong Palace, Gyeongbok Palace and Namdaemun Gate, also known as Sungnyemun Gate.

Meanwhile, Mitsuo fell in love with the five-story pagoda in the Horyuji Temple in Nara while he was there on a high school field trip. That prompted Mitsuo to visit Nishioka Tsunekazu, chief carpenter of the temple and Japan’s first-ever intangible cultural heritage in the area of wooden architecture. Mitsuo recollected how Tsunekazu was a man of few words.

“The teacher never really gave a one-point, detailed lesson, but instead he would just do things and let you take a peep,” said the 65-year-old Mitsuo. “I remember how I would pick up a scob he made and practice planishing until I got the same shape of scob out of the wood.”

It was in 1973 that Mitsuo first became master builder for the restoration project of a three-story pagoda at the same temple he so admired as a youth.

Today, he is focused on fostering young talent in traditional wooden architecture by running a carpenters’ group called Ikaruga Kosha.

Li decided to become a carpenter after finishing his military service. With high hopes and strong determination, he joined the Palace Museum in Beijing where all the top talent in the areas of art, architecture and cultural heritage worked. Like Sin and Mitsuo, Li has gone through tough training from his teachers to become the best there is in Chinese wooden architecture.

“Back in the old days, we didn’t have a textbook or a manual,” he said. “The notes the teachers jotted down were the textbook. The road to becoming a chief carpenter is tough. But what kept me going was the idea that everything my hands touch are the country’s and the world’s treasures. The pride and the gratitude that come from such an idea is hard to describe in words.”

To laymen’s eyes, the traditional wooden structures of Korea, Japan and China may seem to be all the same.

But to the discerning eye, there is a world of difference.

In Japanese architecture, small materials and attention to detail are key.

“In Chinese palaces, all structures are strictly categorized and graded. And the restoration takes place in accordance with the grade. For instance, you are allowed to use only certain types of wood, roof tiles and bricks, depending on the grade,” Li said. “I visited Gyeongbok Palace, and I could see there is also a grade system. But it didn’t seem as strict as China’s.”

Mitsuo pointed out how Korea has many structures with pillars built on top of stones.

“I always wondered why. And I recently learned it was because Korea has always been rich in hard and firm granite,” he said.

“Such is not the case with Japan. Japan in contrast is rich in basalt, instead.”

The three men all agreed the type of wood is of the utmost importance in the traditional wooden architecture of their countries.

“In China, many forests are disappearing nowadays due to development,” Li said. “So we import pine trees from other countries in Southeast Asia or Africa. There needs to be efforts to save forests and trees.”

Mitsuo agreed. “It’s hard to find beautiful trees these days that are good enough to be used for building palace or temple structures. I usually advise youngsters who dream of becoming carpenters to take an interest in forests, first.”

Although the meeting was a rare one, it appears as though it might develop into a regular thing. Sin, Mitsuo and Li agreed to get together every three years, in each of their countries.

“I think Asian wooden architecture will further flourish if we share our techniques and know-how,” Sin said.

The exhibition - which runs until Jan. 30 - features about 100 models, tools and documents related to chief carpenters the three countries.

“King Jeongjo [of the Joseon Dynasty] organized 11 parties to commemorate the hard work of builders and artisans on the Hwaseong Fortress [in Gyeonggi],” said Oh Seon-hwa, curator at the Suwon Hwaseong Museum. “He also endowed them with medicine to help them fight summer heat, nutritional supplements and fur hats in the winter.”

Museum officials said they hope that through the exhibition, the public will learn about and appreciate chief carpenters and their role in history.