The aisles of a major discount store in Seoul are almost empty as consumers feel the weight of the deepening recession. The Korea Development Institute yesterday lowered its growth outlook for this year to 2.2 percent and 3 percent for next year. By Park Jong-geun


A state-run think tank laid out a gloomier outlook for this year and next as the recession is finally affecting the overall market.

The Korea Development Institute (KDI) advised the government not to refrain from tapping into the supplementary budget by issuing more government bonds to stimulate the economy when necessary.

This comes in sharp contrast to the government’s earlier stance of leaving the supplementary budget alone to realize a balanced budget. 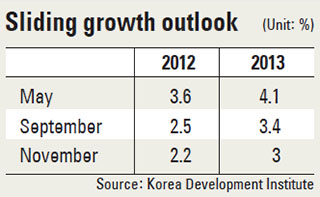 Korea has one of the lowest debt-to-asset ratios compared to other members of the Organization for Economic Cooperation (OECD), which was one of the factors that has helped improve its credit ratings in recent months.

The think tank projected yesterday that the economy will expand 2.2 percent this year and 3 percent next year. This is a drop from its earlier forecasts of 2.5 percent and 3.4 percent, respectively.

The outlooks are even more conservative than those issued by the central bank, which also downwardly revised its estimates last month. The Bank of Korea in October lowered its forecast for this year from 3 percent to 2.4 percent, and from 3.8 percent to 3.2 percent for 2013.

The KDI projected that external uncertainties, including the sovereign debt crisis in the euro zone and the looming fiscal cliff in the U.S., will continue to affect Korea’s trade, as well as private spending in the first half of the year.

But it added that the situation will likely improve, contributing to a mild recovery in the second half. In the first half of next year, the Korean economy is likely to post 2.2 percent growth, with this improving to 3.7 percent in the latter half.

The KDI report said the biggest issue next year for the government in macroeconomic terms will be balancing fiscal spending and loosening its monetary policy.

It said that as the Korean economy could enter a low-growth era, it needs to look into utilizing a supplementary budget, especially if the U.S. proves unable to dodge the fiscal cliff.

“If the government opts for a supplementary budget, it should invest in improving the longer-term employment system rather than spend on projects with short-term effects, such as government-led projects on infrastructure construction that only hire temporary workers,” a KDI official said.

But the think tank added that the government should consider a supplementary budget as a last resort after other measures, such as the early use of budgets and utilizing government funds.

The state-run think tank added that the sluggish state of the economy could be more aggressively countered by further lowering the nation’s benchmark borrowing rate.

The central bank shaved a quarter point off the key borrowing rate last month as the impact of the global economic downturn is more keenly being felt in Korea. It kept the rate frozen at 2.75 percent this month.

Others suspect the central bank will lower the key rate in the near future under mounting pressure.

Standard Chartered projected earlier this month that it would slash an additional 0.25 percentage point in January.

“A looser monetary policy would likely limit the sudden rush of hot capital from entering the local market due to the sharp difference in interest rates with other countries. It would also help the real estate market,” a KDI official said.