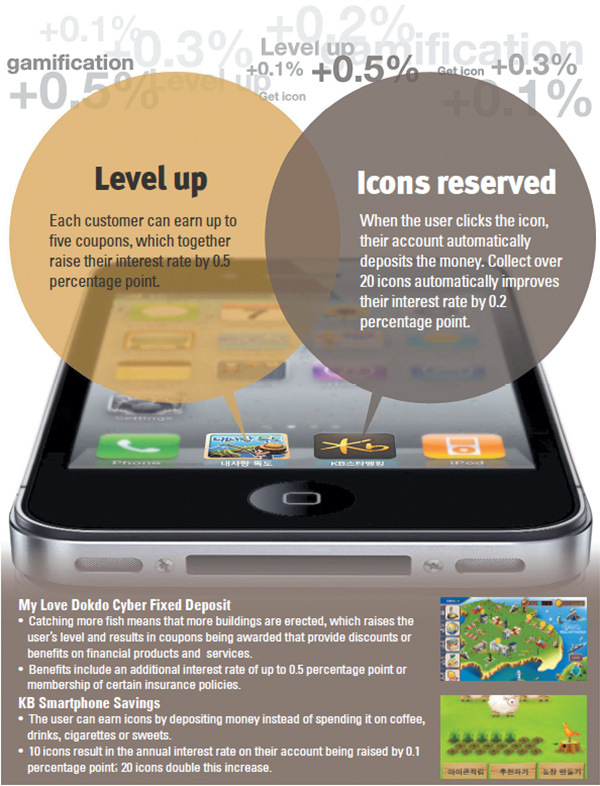 A 39-year-old with the surname Yim plays “My Love Dokdo” on his smartphone whenever he has time - not just because the game is addictive, but because it can garner him a better interest rate on his online banking account.

“I started playing it because if I reach level 20 the interest rate on my account will automatically go up 0.5 percentage point,” said Yim, who recently opened a “My Love Dokdo Cyber Fixed Deposit” account with NH Nonghyup.

As smartphones and tablet PCs become ever-more ubiquitous, local financial companies are grafting games to their online banking systems to attract new customers. The trend is dubbed gamification, which refers to the use of game mechanics and game design techniques in non-game contexts.

One of the most successful examples of this has come from Nike. When runners wear the brand’s sneakers equipped with a sensor called Nike Plus, it calculates the number of calories burned, measures the workout time and distance, and sends them the information online.

When they reach their pre-set workout target, the company awards them a trophy online. Users can also upload their records on social networking services and compete with their friends. More than 2 million people worldwide now subscribe to the service.

The global market for products or services grafted with games is forecast to grow to $2.83 billion in 2016 from $242 million this year, the Korea Creative Contents Agency on Monday.

U.S. research company Gartner projects that over 70 percent of 2,000 global financial enterprises will have introduced at least one application by 2014 that use games to foster a fun sense of competition.

Although the trend is in its early stages here, local financial organizations have started paying attention to games as potential sales and marketing tools, rather than just listing the features of their saving or fixed-deposit accounts.

KB Kookmin Bank introduced one savings product named “KB Smartphone Savings” that gives more banking benefits to its consumers when they play a game synced to their financial products.

Within two years of its release, the bank has seen more than 2.8 trillion won ($2.577 billion) deposited in around 380,000 newly opened accounts.

Each customer’s account has a summary on top of an image of an animal farm. As they keep the account open longer, more animals appear on the main page. Trees and fodder are added if they recommend the products to their friends or relatives. If they accrue 10 of these features, their annual interest rate improves by 0.1 percentage point. It climbs by the same margin if they attract another 10 features.

Meanwhile, holders of a “My Love Dokdo Cyber Fixed Deposit” account get points when they catch fish. The points enable them to create their own virtual town on their smartphone. As their town improves, so they move up to the next level. When they reach a higher level they become eligible for higher interest rates, better insurance fees and cheaper or totally waived service fees.

“People will do things voluntarily when they feel they are fun,” said Lee Sung-hoo, a senior research fellow at Samsung Economic Research Institute. “If there is some element of competition involved, people tend to get more interested and stick with it.

“Since the quality and features of financial products have become similar, the banks are trying to add more fun [to their services],” he added.

According to the Hana Institute of Finance, PNC Bank in the U.S. has encouraged customers to save more though a game called “Punch the Pig.”