Durant and Westbrook bring storm down on 76ers

Durant and Westbrook bring storm down on 76ers 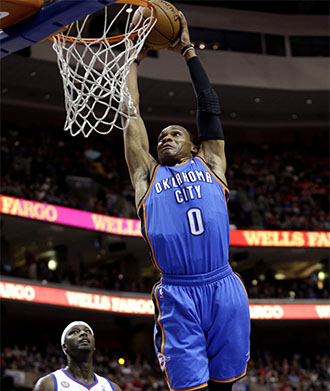 Oklahoma City Thunder’s Russell Westbrook (0) goes up for a dunk as Philadelphia 76ers’ Kwame Brown looks on during the first half of an NBA game on Saturday in Philadelphia. The Thunder won 116-109. [AP/YONHAP]

PHILADELPHIA - No matter how many shots the Oklahoma City Thunder missed, they remained confident about the next one.

Serge Ibaka added 18 points for the defending Western Conference champions, who have won nine of 11 to go to 10-4.

The Thunder missed their last seven shots in regulation, but got 3-pointers from four different players in OT.

“We weren’t making shots at the end, but I like the fact guys continued to stick with each other and trust each other,” Thunder coach Scott Brooks said. “Trust isn’t a word we throw around loosely. You’re not always going to make shots, but if a guy is open, you have to trust he’ll make the next one.”

Thad Young had a season-high 29 points and career-high 15 rebounds, and Evan Turner scored 26 points for Philadelphia, which has lost two in a row after winning three straight.

Trailing most of the game, the Sixers tied it at 94 on a dunk by Young off an underneath pass by Turner with 5:01 left.

The Thunder regained the lead on Westbrook’s driving layup and Durant’s 10-footer made it 98-94. A pair of free throws by Lavoy Allen cut it to 98-96. The teams combined for eight misses and three turnovers until Young’s layup tied it at 98 with 1:36 to go.

Each team missed its next two shots and Turner deflected away an inbound pass with three seconds left to send it to overtime.

That’s when the Thunder found their shooting touch from beyond the arc.

“We trust each other. We live and die with those shots. Make the right play and they came up big for us,” Durant said. “It’s part of the game. You’ve got to have trust if you want to be a good team. It doesn’t matter what. These guys are in the NBA for a reason. They can play. I trust them 100 percent to go make that shot. I think it’s going in every time.”

In Dallas, the Los Angeles Lakers have scoring beyond Kobe Bryant in Mike D’Antoni’s offense. Not so much for the Dallas Mavericks when OJ Mayo is a bit off, at least until Dirk Nowitzki gets back.

Metta World Peace hit three quick 3-pointers to spark a Los Angeles barrage from long range, and the Lakers scored 36 points before Bryant took his first shot in a 115-89 blowout of the Mavericks on Saturday night.

In Miami, down by seven points with less than two minutes left, LeBron James’ current team was in big trouble against his former team until James found Ray Allen for the go-ahead 3-pointer for a 110-108 victory over the Cleveland Cavaliers on Saturday.