No easy day for Redknapp at QPR

No easy day for Redknapp at QPR 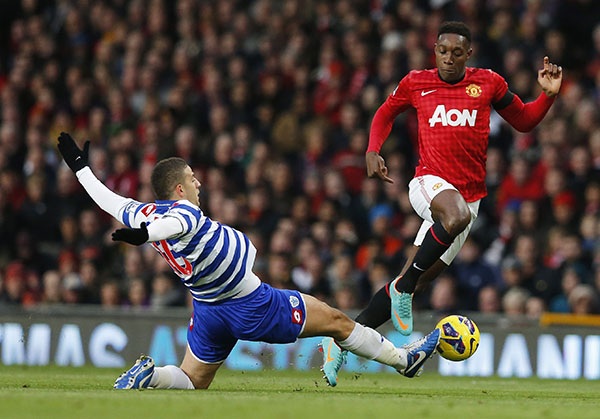 
Manchester United provisionally reclaimed the top spot in the Premier League by coming from behind to beat Queens Park Rangers 3-1 on Saturday as the bottom-placed team failed to be galvanized by Harry Redknapp’s arrival as manager.

Jamie Mackie put QPR ahead at Old Trafford, where Redknapp was watching from the stands hours after replacing the fired Mark Hughes.

But the west London team failed to secure its first win of the season, with Jonny Evans equalizing before Darren Fletcher, and Javier Hernandez scored to put United back on the winning path after losing at Norwich last weekend.

“We played for 10 or 15 minutes,’’ United manager Alex Ferguson said. “That was the sum total of our real performance from Manchester United. Of course it is frustrating we keep ending up in that position, but when they scored, it definitely sparked us up.’’

United is now two points ahead of Manchester City, with the defending champions due to face Chelsea on Sunday.

West Bromwich Albion dislodged Chelsea from third by keeping up its flying start to the season with a 4-2 victory at Sunderland, but Arsenal is languishing in sixth place after a 0-0 draw with Aston Villa.

At Old Trafford, United halted a run of back-to-back losses, but like so often this season had to fight back from a losing position.

Seven minutes into the second half, Anders Lindegaard turned Kieron Dyer’s low cross away from his goal and Mackie put the ball into the net from close range.

“It’s not great,’’ Fletcher said. “The only positive is we keep coming back. We cannot allow it to keep happening.’’

The game turned in United’s favor only after Paul Scholes and Ashley Young were replaced by Anderson and Javier Hernandez.

It was defender Jonny Evans, though, who equalized. The Northern Ireland international nodded Danny Welbeck’s header from Wayne Rooney’s corner into the net in the 64th to claim his third goal of the season.

Four minutes later, Fletcher scored his first league goal since recovering from a chronic bowel complaint that threatened his career, heading in another corner from Rooney.

Hernandez claimed his ninth of the season before United defender Rafael da Silva cleared Clint Hill’s header off the line.

“I would tell the fans, ‘Don’t lose faith,’?’’ said QPR coach Mark Bowen, who temporarily took charge of the team as Redknapp watched from the directors’ box. “The quality is there, but everything is conspiring against us at the moment. It’s individual errors which are costing us rather than team errors.’’

In Spain, Real Madrid’s defense of their title suffered a major setback when Real Betis surprised them 1-0 in Seville on Saturday to leave the champions eight points behind leaders Barcelona having played a game more.

Spain midfielder Benat pounced on an error to score after 17 minutes, and Jose Mourinho’s team ran out of steam and ideas as they chased the game in the second half.

Real only lost two games and dropped 14 points on their way to the title last season, but have already tasted defeat three times in 13 games in the current campaign.

Mourinho’s side stayed third with 26 points, five behind second-placed Atletico Madrid, who were due to host Sevilla on Sunday and who visit the Bernabeu next weekend.

Unbeaten leaders Barca, who had only dropped two points before Sunday’s match, were in a position to open an 11-point gap over their archrivals with a win at sixth-placed Levante.

“We have taken a step backwards in trying to cut the points gap,” captain Iker Casillas told Spanish radio. “It has been a tough blow.