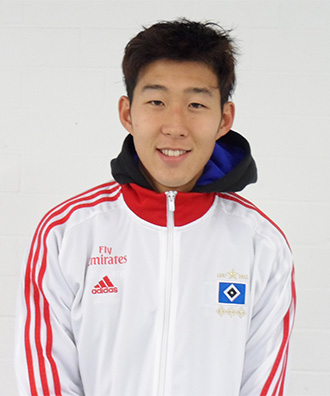 DUSSELDORF, Germany - As rumors grow about a possible trade to Inter Milan, Arsenal or Liverpool, a change of clubs may not be enough to satisfy Hamburg SV’s Son Heung-min, who has set his sights on becoming one of the world’s best players.

The 20-year-old striker, who has grown from a bashful young man into a constant menace to opposing team’s defenses on the pitch, idolizes Real Madrid forward Cristiano Ronaldo.

“I liked Manchester United from 2003, even before Park Ji-sung began playing for the team,” Son said in an interview with the Ilgan Sports, referring to Korea’s first English Premier League player. Park spent seven years with United from 2005. “And that was because of Ronaldo.”

Son said he also admires Barcelona’s Lionel Messi, who regularly competes for world player of the year with Ronaldo, but feels closer to Ronaldo.

“Messi is amazing - a natural-born football genius,” Son said. “Ronaldo, on the other hand, seems like he had to work for it. I can relate more to that.” Son said he takes over 1,000 practice shots at goal each day in a bid to emulate his heros. He even quit tweeting recently to focus more on hitting the ball.

His father and mentor Son Woong-jeong, a former player who runs a football academy for young people in Korea, recently told the JoongAng Ilbo that his son aspires to play for Manchester United and Real Madrid - just like Ronaldo.

Son’s hot scoring streak in Germany has slowed in recent games, and he failed to add a seventh goal this season in an away match at Dusseldorf on Friday. Hamburg lost 2-0, conceding one goal due to a passing error by Son.

He was undaunted, however, saying the mistake taught him a lesson.

“You don’t become an adult unless you make 1,000 mistakes,” he said, referring to the recently published essay of the same title by Seoul National University Prof. Kim Ran-do. The book, a present from this reporter, was handed to him by his father whom the reporter met on a plane to Europe a week earlier.

Maybe because of his mistake on Friday, he seemed embarrassed about recent descriptions of him in the German press as “Sonsational,” saying he does not deserve such credit yet. He also dismissed the reports about possibly being traded as groundless rumors.

Meanwhile, he likened his football career to being 1-0 down in the fifth minute of a match.

“It has just kicked off, and I have a lot of things to learn during the remaining 85 minutes,” he said.