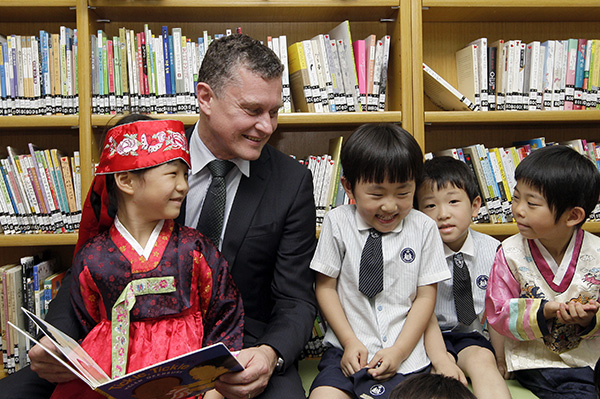 Jean-Baptiste Debains, Louis Vuitton’s president of its Asia-Pacific operations, reads books with Korean children at the Sunflower Library, which the French luxury brand helped build in at the SOS Children Village in Daegu. Provided by the company


In the face of mounting criticism that they are not meeting their corporate social responsibility (CSR) obligations in Korea, more foreign businesses here are striving to showcase their social conscience through a range of programs and donations.

Meanwhile, foreign luxury brands say they are involved in a number of such programs but are reluctant to trumpet their efforts so as not to dilute their respective brand images, which are linked to luxury and opulence not poverty and hardship.

CSR has become a hot subject as Korean conglomerates continue to take flak for being on the wrong end of economic polarization in the country as politicians promote populist policies ahead of the Dec. 19 presidential election.

Louis Vuitton, one of the most popular luxury brands among Koreans, said it is engaged in various CSR activities. “Although our activities are often not publicly recognized, we have been running a number of CSR programs since 2010, and we have increased the number over the last two years,” said a PR official at the company. The brand set up shop in Korea in 1991.

Louis Vuitton opened a library in May for children in the Daegu SOS Village. Jean-Baptiste Debains, president of the brand’s Asia-Pacific division, visited the city for an opening ceremony.

Yves Carcelle, chairman of French luxury conglomerate LVMH, which owns the brand, said the company will increase its CSR efforts in Korea, which he considers one of its four biggest markets in the world. He visited Seoul in September 2011, when the brand opened a shop in a duty free mall at Incheon International Airport.

Gucci launched a fashion scholarship program for Korean students in April. The Italian brand’s first CSR program in Korea picks five students every year and pays their tuition fees for a period of five years.

According to an annual report by the National Tax Service, there were over 10,000 foreign business entities in Korea as of last year.

However, less than 50 are actively fulfilling their CSR duties and making donations in the country, according to data reported to the Financial Supervisory Service (FSS). Luxury brands say they are easy targets as they choose not to disclose their activities in this area.

The FSS data show that donations by foreign businesses account for 0.06 percent of their sales on average. Louis Vuitton made the largest donation of 58 million won ($53,384) in 2010 among similar luxury brands, equivalent to 0.01 percent of its sales. Last year, it almost quadrupled the total donation to 211 million won.

Meanwhile, foreign pharmaceutical companies have been making relatively generous donations, according to the data. Sanofi-Aventis Korea, a French health care group, made the biggest donation of 2.3 billion won last year among foreign drug makers in the country.

“It is true that the Korean market is considered important, but it is still small compared to other markets like China, so the size of CSR programs by foreign businesses probably wouldn’t be that big here,” said a PR official at Bayer Korea, a German pharmaceutical and petrochemical company.

“Since regional branches of multinational companies should follow the guidelines set by their headquarters, it is not easy to raise donations or investments in CSR programs in favor of particular markets.”