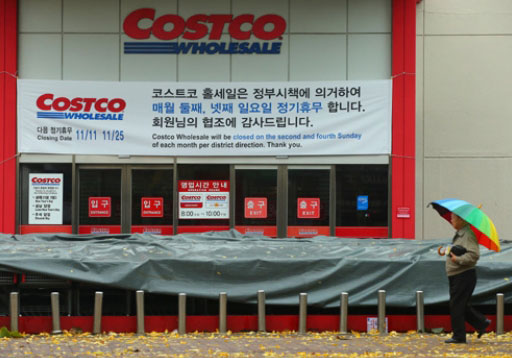 Although the recently revised Distribution Industry Development Act failed to pass through the National Assembly, a greater number of large discount store chains and super supermarkets (SSM)?will have to close on several Sundays a month as?local governments?are more aggressively enforcing the original law.

The figure represents a massive jump from July, when only 3 percent of the 378 stores closed in defiance of the ordinance ordering them to close for two Sundays a month.

The move came as the public and the government ramped up their criticism of large retailers recently for acting irresponsibly and not conforming to the law, which was introduced in February to protect local mom-and-pop stores and traditional markets hit by a slowing economy but has seen huge resistance.

Since July, the retailers have filed suit after suit to have the law nullified in various Seoul districts and other areas, and in many cases, local courts have sided with them.

However from this month, the districts of Gangdong and Dongdaemun in Seoul and Yeonsu in Incheon resumed enforcing the ordinance.

The retail industry expects more large discount stores will comply with it under pressure from local governments and also voluntarily.

The council was formed to reach a consensus on key issues affecting all three parties, and the ministry is urging local governments to respect the agreements it makes for a more harmonious resolution of thorny issues.

“The council showed signs of faltering due to the conflict between large retailers and small business owners over the recent Distribution Industry Development Act at the National Assembly, but the council is necessary for both sides from a long-term perspective,” said a source from the retail industry who asked to remain anonymous.

The recently revised distribution act sparked a fierce backlash by large retailers as it proposed expanding from two to three the number of days a month large stores must close. It also intended to limit their operating hours by four hours a day.