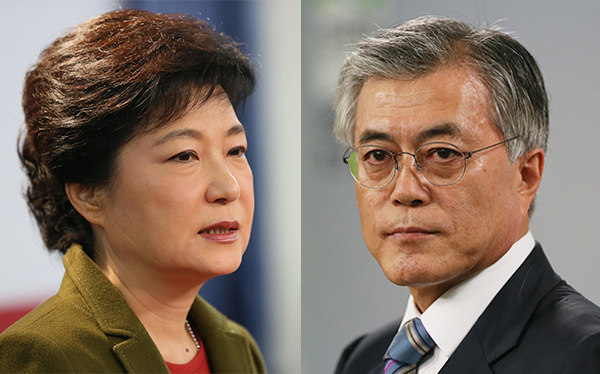 
A JoongAng Ilbo poll conducted a day after liberal independent Ahn Cheol-soo abandoned his presidential run showed the approval rating of the ruling Saenuri Party’s Park Geun-hye to be ahead of her main rival Moon Jae-in of the Democratic United Party by 5.5 percentage points.

The outcome was highly disappointing for liberals, who had expected the popularity of Moon - now the single liberal contender - to surge after what his camp likes to call a “merger” with Ahn ahead of the Dec. 19 election.

Instead, some of Ahn’s supporters seem to blame Moon for the 10 days of failed negotiations to find a process to select a unified candidate and Ahn’s dropping out.

The poll showed Moon was only able to absorb half of Ahn’s supporters to back him in a two-way race with Park. 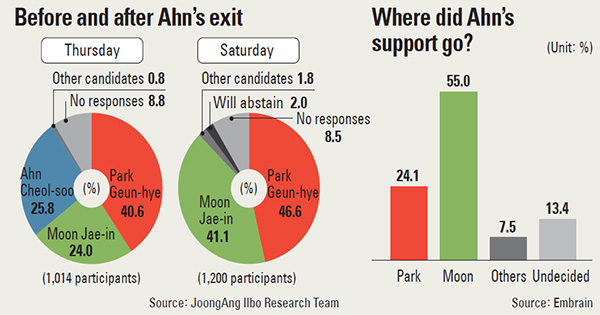 On Saturday, the JoongAng Ilbo conducted a survey of 1,200 eligible voters by phone.

The approval rating of Park was 46.6 percent, considerably higher than Moon’s 41.1 percent, the poll showed. In a survey conducted on Thursday, one day before Ahn dropped out of the race, the combined approval rating for Moon (24 percent) and Ahn (25.8 percent) was 49.8 percent. Park’s approval rating was 40.6 percent, 6 percentage points lower than in Saturday’s poll.

The margin of error for the latest poll was plus or minus 2.8 percentage points.

“Many of Ahn’s supporters are abandoning [Moon] because the liberal merger wasn’t based on a two-way agreement between Moon and Ahn but a one-way call for resignation by Ahn after much bickering over consolidation rules,” said Huh Jin-jae, director at Gallup Korea.

Ahn, a software mogul-turned-academic with no political experience, abruptly gave up his presidential bid Friday. He officially endorsed Moon, but had earlier complained about dirty tricks by his camp and accused it of playing old-style politics.

Much of Ahn’s popularity stemmed from his promise to bring change to Korea’s political culture. He is particularly popular with young voters and swing voters, who are centrist and do not have a party preference.

The liberals knew they could not field two candidates without delivering the election to the ruling party’s Park.

In a separate poll conducted by the JoongAng Sunday with Embrain on Saturday, Park was also in the lead with 44.7 percent over Moon’s 41.3 percent.

But when Ahn actually stepped down last week, the latest survey showed that only 55 percent of his supporters rallied around Moon.

“Many of Ahn’s supporters were political independents,” said Yun Seong-yi, professor of politics at Kyung Hee University. “They were critical and cynical about existing politics.”

Yun added that the whole process that led Ahn to call off his candidacy did not give a good impression of Moon.

The biggest challenge for Moon and the DUP is determining how to reach out to the former supporters of Ahn.

After being notified of Ahn’s decision to quit the race, Moon on Saturday stayed in his residence in Gugi-dong, central Seoul. Aides said he spent time deliberating on how to attract Ahn’s supporters.

On Saturday, top campaigners for Moon also expressed their willingness to give up their posts to allow him to form a new election campaign that will include other liberal personalities.

“We agreed on the need to form a new election camp based on a spirit of alliance [between Moon and Ahn],” said one of Moon’s campaign officials. “I’m aware Moon is also pondering many options regarding this matter.”

Insiders said one of the options is to ask Ahn to take charge of Moon’s campaign.

Ahn has not commented on those ideas.

Ahn told his team after his last-minute press conference Friday that he plans to leave the capital for some rest and to plan his next move.

“There hasn’t been any notice from Ahn to us on what we should do now,” said an official from Ahn’s campaign team.

“It’s undecided whether the candidate [Ahn] will be at the ceremony,” said Jeong Yeong-soon, a spokesperson for Ahn.