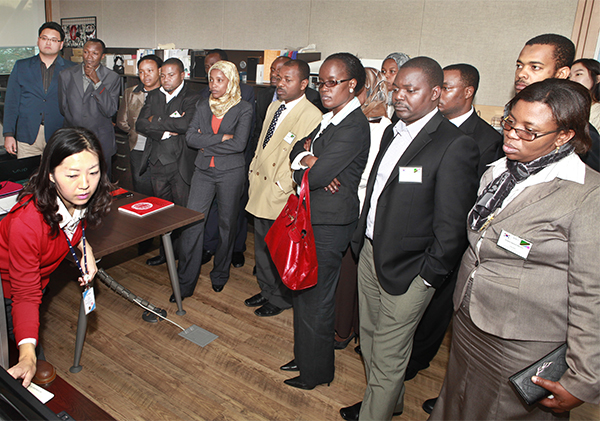 Law enforcement officials from Tanzania visit the Digital Forensic Center of the Supreme Prosecutors’ Office in Seocho District, southern Seoul, to learn about cybercrime prevention as part of a 20-day training program on cybercrime prevention and corruption control, hosted by the Korea International Cooperation Agency and the Legal Research and Training Institute. By Park Sang-moon


“In the field of digital forensics, I believe our center may be the only one in the world to manage all digital analyses in one place,” said a prosecutor at the Digital Forensic Center of the Supreme Prosecutors’ Office in southern Seoul to a group of law enforcement officials from Tanzania.

The 15 officials from the east African country participated in the 20-day training program on cybercrime prevention and corruption control, hosted by the Korea International Cooperation Agency.

They watched the screen in the digital analysis room, where data on phone calls of suspects, e-mails and bank account transactions could be screened and organized into colorful visual representations instead of manual inspection.

“How do inspectors find the integrity not to leak private information that they can access?” asked one prosecutor from Tanzania.

Kim Tae-eun, a Korean prosecutor, responded, “Everything we do on the system is logged. And we can only have access to the projects we are assigned to.”

According to an Organization for Economic Cooperation and Development report published in July 2012, Korea’s high-speed Internet penetration rate topped 100 percent for the first time among the group’s 34 nations.

But now that Korea is an information technology leader, it also deals with a high volume of cybercrimes.

As the Tanzanian officials visited the newly opened International Cooperation Center of the Supreme Prosecutors’ Office in Seocho District on Nov. 15 to witness how Korean prosecutors investigate high-tech crime, they viewed the new Digital Forensic Center’s image, voice, DNA and cryptanalysis sections to see how all the departments worked together to crackdown on crime.

The forensic center supplied analysis in high-profile cases such as the DDoS attack on the National Election Commission last October in the midst of the Seoul mayoral by-election which shut down the election Web site.

The officials, in their 30s and 40s, were from Tanzania’s Ministry of Justice, Prosecutors’ Office and National Police Agency. Some were prosecutors specializing in cybercrime investigations.

“In Tanzania, we switch from division to division frequently,” said Tulibake Faidon Mkondya, 43, a senior weapons inspection official with Tanzania’s national police force and head of the delegation. “Because I might be placed in cybercrime investigation in my next transfer, the subject is one I am very interested in understanding better.”

The cybercrime prevention training program was held by the Legal Research and Training Institute (LRTI), which educates all public officials under the Ministry of Justice and was established in 1972, located in Yongin, Gyeonggi, where officials attended lectures and seminars hosted by prosecutors, police and other legal experts. The Tanzanian officials also visited legal and crime prevention facilities including the Hwaseong Detention Center and Suwon District Police Agency in Gyeonggi.

They also learned about the program Virtual Forum Against Cybercrime, a training program for network law-enforcement personnel to combat cybercrimes, which was developed in 2005 by state-run the think tank Korean Institute of Criminology, Korean portal site Naver and the United Nations Office on Drugs and Crime.

Korea has hosted numerous cyber crime conferences and seminars over the years, including Interpol and the United Nations Office on Drugs and Crime.

When a U.S. Army computer at Spacecom was hacked, the case was solved with the help of the Korean National Police Agency’s Cyberterror Response Center.

The FBI deputy director visited Korea and praised the system.

In 1997, the Ministry of Justice commenced the International Workshops on Crime Prevention and Criminal Justice.

“Every year, the Legal Research and Training Institute invites foreign legal officials engaged in criminal justice, and holds training workshops for the purpose of promoting better understanding and cooperation in the area of criminal justice and legal development among countries,” stated Roh Hwan-gyun, president of the Legal Research and Training Institute. “Since 1997, we have hosted 778 legal officials from 83 countries worldwide.”

“The most notable case last year was the DDoS attack on the National Election Commission,” stated Lee Hyung-taek, prosecutor investigation researcher at the LRTI, who manages international cooperation.

“The cybercrimes that Tanzania deals with currently are much like the problems that we dealt with in the 1980s and 1990s, such as spam.”

“Back home, we have the DNA tests, we have the skills and motivation to track down cybercriminals. But because there is no legislation and no law on cybercrimes, the police cannot do anything.”

He added that there is also a lack of technology to crack down on cyber crimes.

“Rather than high-tech crimes, we deal more with common cybercrimes back home over mobile phones or e-mail.”

Mwangasa stated, “If there is no law, you cannot prosecute.” He said he hopes legislation on cybercrimes comes to fruition in Tanzania soon.

Korea has corresponding legislation against cybercrimes covered under the Criminal Act of 1995, which includes infiltrating into information and communications networks and computer fraud.

For example, any person who has “defamed any other person by alleging openly false facts through information and communications networks with the purpose of slandering him” can be punished with up to seven years in prison with labor or a fine of up to 50 million won ($46,000).

Or in the case of any person who “disrupts, paralyzes or destroys critical information infrastructure,” they can be “punished by imprisonment with prison labor for up to 10 years or fined up to 100 million won.”

“The program had been for us a remarkable success as it provided us with a better understanding of Korea’s society and its criminal justice system, in particular cybercrimes and corruption control,” stated Mkondya, head of the delegation.