Pros, collegians to tip off in first KBL Pro-Am

Pros, collegians to tip off in first KBL Pro-Am 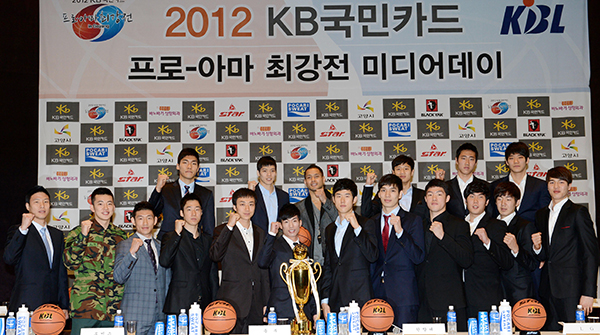 Players and coaches of the Korean Basketball League, college teams and the military-affiliated Sangmu pose in Seoul yesterday ahead of the nine-day KB Pro-Am Basketball Championship that starts tomorrow. [NEWSIS]


As a college senior in 1994, Moon Kyung-eun led Yonsei University to the title of the Basketball Festival, the first college to win the annual competition that pitted college teams against corporate-sponsored powerhouses.

Now at the helm of the Seoul SK Knights, one of the leading teams in the country’s professional league, Moon, 41, finds himself on the other side, as college teams armed with youth and grit prepare to challenge professionals in a new tournament based on the old Festival format.

The KB Pro-Am Basketball Championship will debut tomorrow and 10 Korean Basketball League teams will take on seven college squads with the winner claiming bragging rights as the country’s best team.

The Knights will play Yonsei in tomorrow’s opener at Goyang Stadium in Ilsan, north of Seoul, at 5 p.m.

“When we went up against senior players with corporate teams, we were like, ‘There’s nothing to lose,’?” Moon recalled during a media event in Seoul ahead of the championship.

The event was created by the KBL to maintain fan interest during its midseason break, while providing playing time to more of the professionals and valuable experience to the college players.

The KBL will resume its season on Dec. 9, three days after the pro-am event ends.

In an expression of their confidence, many professional team coaches attending the media event said they would use bench players liberally in the pro-am championship.

Moon said he is considering sending out best of his players if college teams prove to be tough opponents.

“I am excited about being able to play my alma mater,” he said. “I will not go easy with them, however, and will play to win.”

It will be the first pro-am matchup since the Basketball Festival became an amateur-only event with the creation of the KBL in 1997.

The colleges have won nine of the Basketball Festivals since then - Chung Ang five times and Yonsei four times - over Sangmu, which won the other six titles.

Star players on the college teams hope to show they will be a match for the KBL professionals, as well.

Lee Jong-hyun, 18, who plans to enroll at Korea University in March, is one of them. The 2.06-meter (6-foot-9-inch) center played for the national team during the London Olympics as a high school student. He will play against the Busan KT Supersonic and veteran center Seo Jang-hoon, 2.07 meters, on Friday.

“Isn’t it the same without foreign players?” Lee told the media event, referring to the rule that excludes foreign players from the pro-am competition. “You will never know until you give it a try.”

College champion Kyung Hee has 2.07-meter center Kim Jong-kyu and will take on the Incheon ET-Land Elephants on Thursday.

Huh Woong, son of Huh Jae, a former star player who is now the coach of Jeonju KCC Egis, will lead the offense for Yonsei as a guard.

“We will show a clear disparity between the professional and the amateur,” said SK guard Kim Sun-hyung, whose 20 points led the Knights to their fourth straight victory, an 83-61 win over the Changwon LG Sakers on Sunday.

The winning team of the championship will get 50 million won ($46,083), with the runner-up to receive 20 million won. The pro-am’s most valuable player will get 3 million won.