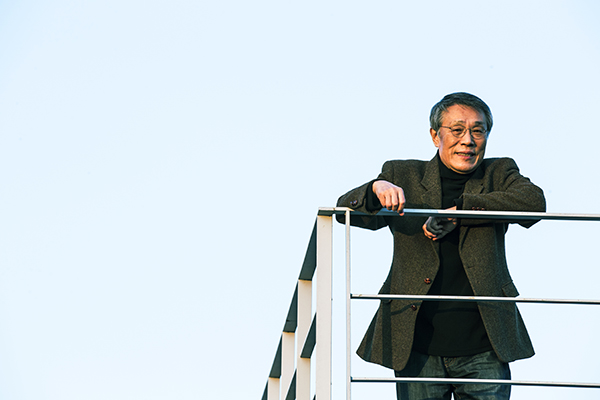 Hwang Suk-young recently released his new book, “The Sound of the Rapids.” “If a fisher wants to catch a fish, he needs to go somewhere where there are lots of them. We need to go on the Internet more


It has been 50 years since writer Hwang Suk-young embarked on his career as a novelist, and to celebrate he released a new book, “The Sound of the Rapids.” The story is set in the 19th century of the Joseon Dynasty and based on the chaotic life of Lee Shin-tong, a professional storyteller known as a jeongisu.

The protagonist of the novel, Lee, was born to a commoner’s family, so despite his brilliance and ambition to serve his country, he cannot take the civil service exam. After years of acting like a clown and as a writer of theatrical plays, Lee became involved in a revolt, and the story of his life ends in death.

“Lee is a bad boy who causes his family a great deal of distress. Yeon-ok, Lee’s partner, does not leave his side and slowly manages to understand him. I wanted to show who Lee was through the perspectives of different characters,” Hwang said in an interview with the JoongAng Ilbo.

Hwang acknowledged that Lee’s character resembles his own personality, especially in the scene where Lee excitedly reads the chapter “Jangkkijeon” in a medicine shop.

“The main character is like my avatar. I have a tendency to act like a clown and like to wander around as well. I caused trouble for my family, was kicked out of my house and even went to prison. All this before the age of 50, and I lived through all that,” he said.

“A storyteller has his own particular destiny, but because he is loved by and receives too much from the public, there are certainly things that he should give up or deal with. That’s the destiny of a storyteller.”

As a storyteller himself, Hwang seems to have lived a life that is more than just hectic.

He was born in 1943 in Manchuria, what is today northern China, during Japanese colonization. After he returned to his home country, he survived the Korean War (1950-53) and also fought in the Vietnam War.

Because he was outspoken against the military and the Korean government and called for democracy and freedom of speech, Hwang illegally traveled to Pyongyang in 1989 at the invitation of the North’s culture and arts association. When he returned to Seoul four years later, he was immediately sentenced to prison for seven years, during which he went on 18 hunger strikes.

As for Hwang’s literary career, after his debut in 1962, he kept writing realistic pieces on modern Korea. His distinguished works include “Jang Gil-san,” “The Guest,” and “Gangnammong,” among others.

Hwang suggests that writers are bound to have tough lives because they cannot ignore what’s going on in their countries and around the world. Writers need to encounter all sorts of people and, inevitably, they become aware of other people’s pain, just like Lee does.

“A writer needs to hold up his antenna and find out what people want to say these days. That’s why I want to write short stories,” Hwang said. “Midlength or short stories are perfect when writing about a topic relevant to a particular period in time. It’s like fishing or flying a kite. You must pull hard at the right moment. Writing a short story is like catching the right moment in a particular lifetime.”

Hwang said that what he really wants to write about is the collapse of the middle class. “Just like the lives of those at the bottom of the income ladder, the lives of middle-class people are filled with uncertainty and instability. Korea has the lowest birthrate and the highest suicide rate in the world. So the world is telling people not to be born and pushing them off the cliff to death. I want to write pieces that offer comfort and consolation to them.”

The writer wants to send the message of comfort to the world through “The Sound of the Rapids” as well.

“One day, when I was sleeping in a temple deep in a mountain, I heard the sound of running water, something I couldn’t normally hear. It sounded like someone was loudly crying, yelling, shrieking, and then laughing and then talking in subdued voice. The sounds seemed to say, ‘Although life is tough, live like running water that’s nonchalant and indifferent.’

“A story is life. So perhaps my story can help people have the peace of running water,” Hwang said.