A decade on, the cost of Lotto is tallied up

A decade on, the cost of Lotto is tallied up

The average Korean adult has spent 730,000 won ($672) on online lottery tickets over the last decade, as the country’s love affair with the Lotto has waxed and waned.

According to the Lottery Committee of the Ministry of Strategy and Finance yesterday, each Korean adult over 19 has spent an average of 734,518 won on a per capita basis since the launch of Lotto, the country’s first online lottery, in December 2002. 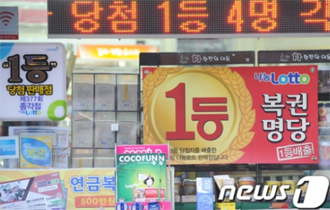 The first year was kind of dull, with per-capita spending at 6,800 won.

But in 2003, Lotto fever peaked when the prize money hit 40.7 billion won after there was no winner for the seventh, eighth and ninth weeks of the year.

Grumbles over the get-rich-quick attitude made the government limit prizes in 2004. It also cut the price of Lotto tickets from 2,000 won to 1,000 won.

“The very basic purpose of a lottery is to help low-income people buy houses and afford education,” said an official at the committee.

“Half of the total proceeds go to vulnerable people, which has changed a negative image of lottery in the country to a positive image.”

Last year, 61 percent of 1,013 lottery ticket buyers said they agreed with the sharing spirit of Lotto in a survey.