Consumer sentiment starts to pick up

Consumer sentiment starts to pick up 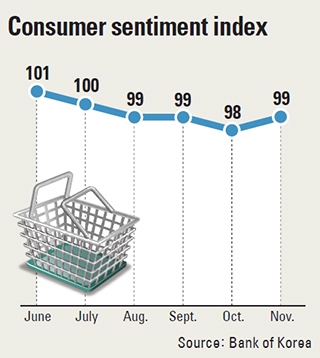 Consumer sentiment this month improved on expectations of a recovering domestic market.

According to Bank of Korea yesterday, the consumer sentiment index (CSI) for the first time in six months turned around. The CSI this month stood at 99 after adding a single point in October.

At the beginning of the year, there was growing optimism about continued economic expansion as Korea posted 6 percent growth last year.

Consumer sentiment climbed from 98 in January to 105 in May. It dipped to 101 in June and fell to 99 in August as the fiscal crisis in Europe and the slow growth of the U.S. and China started to raise fears of another recession.

“Recently there has been an extremely small but distinctive improvement in production and consumption,” said a BOK official. “Also, the mild recovery of the global economy seems to have positively affected consumer sentiment.”

However, the majority of those polled remained skeptical about the state of the economy as a reading below 100 indicates that pessimists outnumber optimists. The survey was conducted on 2,200 households in 56 cities nationwide from Nov. 12 to 19.

It showed a mild uptick in terms of how people feel about their current living conditions, with the index edging up from 86 to 87, while the forecast for future living conditions added two points to 94. Sentiment on household income remained the same as last month at 94, but people’s feelings about spending improved from 104 to 105. More people were upbeat about the future direction of the economy as this gauge added two points.