City transplants are changing the face of Jeju

City transplants are changing the face of Jeju

Huh Joon-young, 37, used to work at a large public relations company in Seoul, when she spent nearly all of her life until moving to Jeju early this year. She purchased an old house by the beach in Seogwipo for 100 million won ($92,200) and remodeled it, which cost her an additional 80 million won, to start a guesthouse business. To come up with the money, she took out a bank loan and used all of her savings.

“My husband was opposed to the idea [of moving to Jeju] at first, but I persuaded him to think of this as an early preparation for our life after retirement,” Huh says. Her husband, who still works in Seoul, comes to Jeju on weekends, a routine that will continue until he finds a job on the Korea’s southernmost island.

“I was working at a public relations company, and there was no distinction in my life between weekdays or weekends not to mention between day and night,” she says. “I just felt like I was being drained of life by the intense rat race in Seoul. I was greedy, working to have more than I needed. And if that didn’t work out, I felt deprived. I was just sick and tired of comparing and competing.”

Now Huh is enjoying life; she has time to watch the sunset from her rooftop or take a stroll along the beach outside her front door.

Huh is part of the trend among city dwellers who are going “back to the farm,” or “downshifting,” to pursue a simpler life in the country. And in Korea, the most popular destination is Jeju Island.

Data from Statistics Korea provide ample evidence of this urban-Jeju movement. Until 2009, there were more people leaving the island than coming in, but starting in 2010 the trend reversed. In the following year, the number of Jeju newcomers increased more than fivefold from 437 in 2010 to 2,343 in 2011.

And the urban exodus has continued this year, with 3,052 new Jeju residents as of July. Also growing is the number of people obtaining agriculture certificates by learning farming techniques, mostly to earn a living. There were 40 certificates issued for Jeju in 2009, compared to 145 last year.

Most of the Jeju immigrants are in their 50s - considered to be an age group for retirement - however, there also are people in their 30s and 40s from large metropolitan areas such as Seoul, Gyeonggi and Busan. 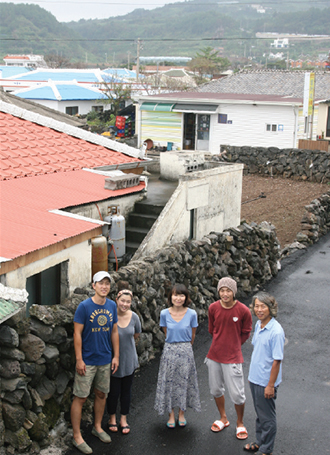 In Daepyeong-ri in Seogwipo, population 540, 10 new guesthouses and cafes have been established this year by people who relocated from Seoul, including Huh Joon-young (center). By Seo Jae-cheol

Lee Sang-geun, 37, who says he used to be a “bad father figure” for not being around the house spending time with his children, now has enough time to “see [his] children every day.” Lee used to own a design company in Seoul.

“I barely saw my children all week, like most fathers in Seoul,” says Lee, adding that he went to work early in the morning and came home in the middle of the night. Lee now works as a freelancer in Jeju.

“In Seoul, it used to take an hour just to drop off and pick up my daughter at kindergarten. Now, my wife and I walk her to kindergarten, which is located in our neighborhood. I think this is what happiness is,” he says. Lee used to think the most important thing a father could do for his child was to accumulate wealth. He no longer sees that as important.

“Of course, I only earn a third of what I used to back in Seoul, but since we spend less here we don’t really feel that our budget is tight,” he says. “One of my colleagues in Seoul is getting ready to move down to Jeju as well.”

Experts see this phenomenon as “a strategic retreat” by the younger generation. “They want to escape from the stress, the source of which is high unemployment for those in their 20s, children’s education and excessive private education expenses for those in their 30s, and fear of getting thrown out of their jobs for those in their 40s,” says Kim Ho-ki, a professor of sociology at Yonsei University.

Psychiatrist Lee Na-mi does not see this social behavior as a fad. “It is a distinct phenomenon in developed countries where people - when they reach a certain stage in their obsessive materialistic lives - change their life goals to personal fulfillment and relationship-building and away from the all-consuming pursuit of economic success, and return to nature,” she says.

Thousands of people have been scouring the Internet for information about “predecessors” who successfully settled down on the island, while “downshifting” success stories like those of Kim and Huh have been covered by the media. 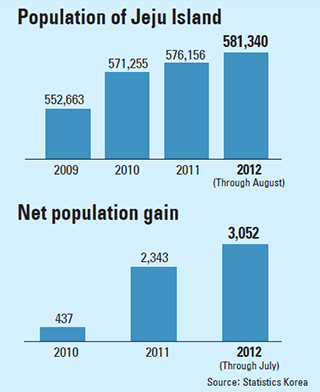 However, “predecessors” say the reality is not as “relaxed and peaceful” as might be imagined.

Im Byeong-do has a weekly blog, “Impeter,” about living on the island in hopes of helping those who are thinking about relocating. Im got on a ship to Jeju with his pregnant wife in 2010.

“Don’t get me wrong. There are so many advantages to living in Jeju,” he says. “But I’ve seen a lot of people coming down here with dreams of living a relaxing life operating a little cafe or cozy guesthouse, who end up going back to where they came from due to the failure of their business or other inconveniences that they don’t hear about in all the success stories in the media.”

On the blog, he warns that real estate prices are escalating on the island.

“It’s not easy to get a house on Jeju Island. Especially in recent years, real estate prices have been soaring due to increasing numbers of immigrants. The value of one lot of a new apartment has increased by 46 percent in six years, not to mention increasing jeonse [long-term deposit housing] fees.”

Bae Sang-man, 34, who recently scrapped his dream of owning a farmhouse in Jeju, can speak from experience about how difficult and expensive it has become to find a decent place to live.

“One day I saw this young man about my age on television. He remodeled an old house he purchased in Jeju and said how he’s living a real life now. And that was just a dream home for every man like me who suffers from long working hours in the city,” says Bae. “But to do that, you first had to be rich.”

Bae spent months researching real estate and made several trips to Jeju to look at houses. He realized that he needed at least 100 million won to purchase a house, excluding remodeling expenses, or to build a house similar to the one he had seen on television.

“And many of the new arrivals I met through the Internet cafes told me it takes six months to a year to complete the remodeling that would take one to two months on the mainland because work stops whenever there’s rain, not to mention a lack of construction techniques, equipment and manpower,” says Bae.

“That’s why I scrapped the plan. It was just a waste of six months, developing a dream that would never come true.”

According to Im, there many cases like that of Bae.

“Most immigrants who come to Jeju think they can live a relaxing life operating a cafe or a guesthouse because they hear so often on the news that there’s high demand for accommodations in Jeju,” says Im. Demand is high only during the peak season and only for registered accommodations, he says.

According to Im, there are no precise statistics on the number of accommodations - hotels, motels, holiday houses, bed and breakfasts, small inns and so on - because a large percentage of them are not registered.

“So many news reports, especially during the peak season, report on a lack of available rooms on the island and an increasing number of visitors, but this, I believe, is only for the luxury hotels and tourist hotels, as most of the tourists who fill up those rooms are foreign nationals who would not stay at a holiday house or a guesthouse,” says Im.

“If the facilities look a little old or the price is slightly more expensive, you’ll lose all the customers,” says Choi. “You also need good online marketing skills to attract those young Koreans who actually stay at guesthouses.”

Professor Kim cautions those who are thinking of moving to Jeju to regard it not as “relocating” but as “emigration.”

“Moving to Jeju often gets called ‘emigrating’ as it requires as much determination as moving to another country,” he says. “It would be great if all the people who go to the island settle down successfully like all those people in the books and news reports, but many people still end up running back to the mainland after failing.”