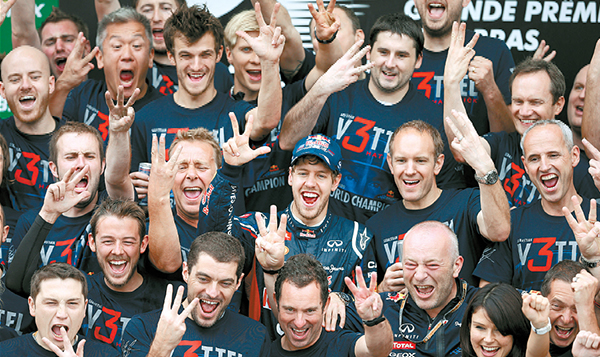 
SAO PAULO - Sebastian Vettel found himself spinning around on the track just after the start, watching helplessly as other cars whizzed past him. His Formula One title hopes seemed to be drifting away with them.

It was only the start of Vettel’s problems Sunday in what he called the toughest race of his career. But he overcame all of them and came away with the only prize that mattered - his third straight championship title.

Vettel shook off a first-lap crash and other difficulties to finish sixth at the Brazilian Grand Prix, good enough to protect his lead over challenger Fernando Alonso and become F1’s youngest three-time champion at age 25.

“Everything that could go wrong went wrong,” he said.

But they were all overshadowed by Vettel, who had to overcome a poor start, the early crash, a damaged car, a broken radio, a botched pit stop and pouring rain.

“Just look at the stuff that went wrong. It was for sure the toughest race,” Vettel said. “We kept believing. It was never game over.”

Vettel is the first driver with three titles in a row since Schumacher won five straight from 2000-04. The only other driver to win at least three consecutive championships was Juan Manuel Fangio from 1954-57.

Schumacher was the first to congratulate Vettel, having just bid his own farewell to the sport. Minutes before the race, he lapped the track with a flag with the words “Thank You.” He used the radio to thank the mechanics and engineers he has worked with as well as his fans watching on TV.

The 43-year-old German is retiring for the second time after struggling in his return with Mercedes. He had ended his career after the 2006 season and managed only one podium finish after retuning in 2010, at the European GP in July.

Schumacher is leaving F1 with numbers unmatched by any other driver. He retires with the most wins (91), pole positions (68), fastest laps (77) and most podium finishes (155).

Vettel needed to finish fourth or better to clinch the title regardless of Alonso’s result.

The Spaniard would have a chance to overtake the German only by finishing on the podium. He looked to have the advantage after a superb start and a chaotic first lap, but in the end couldn’t erase Vettel’s 13-point lead in the standings.