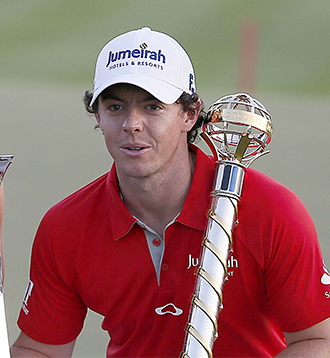 DUBAI, United Arab Emirates - Rory McIlroy won the Dubai World Championship by two strokes on Sunday after finishing with five straight birdies to shoot a six-under 66, ending a year in which he won the PGA Championship and the European and PGA tour money titles.

The top-ranked Northern Irishman recovered from some early putting woes to total 23-under 265 at the season-ending tournament to beat Justin Rose of England, who shot a course-record 62 that included an eagle and eight birdies.

Second-ranked Luke Donald (71) was tied for third with 2011 Masters champion Charl Schwartzel of South Africa (68) at 270. Compatriot Louis Oosthuizen (69), the 2010 British Open winner, was a further shot back in fifth place.

The day was supposed to be a duel between McIlroy and Donald, who were joint leaders after the third round. It never happened.

The Englishman took an early two-shot lead when McIlroy bogeyed No. 1 and Donald birdied the following hole.

But Donald three-putted No. 3 to end a run of 102 holes on the Earth Course without a bogey. Donald then had another bogey on No. 12 to fall three back and never challenged after that, missing the green on No. 17 to put an end to his title bid.

“All runs come to an end,” Donald said. “But again, I struggled to get any momentum today. I felt a little flat and unfortunately I couldn’t get anything going. And you know, Justin put on quite a show in front us and nudged Rory enough to get him going.”

McIlroy just missed an eagle on 14 after a good up-and-down and settled for birdie. After a great drive on No. 16, he hit a pitching wedge 150 yards to within 20 feet of the pin and sunk the birdie. At No. 17, McIlroy probably hit the shot of his tournament, landing a 5-iron within a few feet of the pin.

“It doesn’t really get any better than that,” said McIlroy, whose tennis star girlfriend Caroline Wozniacki watched from the media gallery.

“I guess the same,” McIlroy said. “To be focused on the majors, try to win more of those. I’ve won one in 2011 and one in 2012. It would be nice to keep that run going next year. To keep improving as a player. I can feel like I can improve in different areas of the game still.”