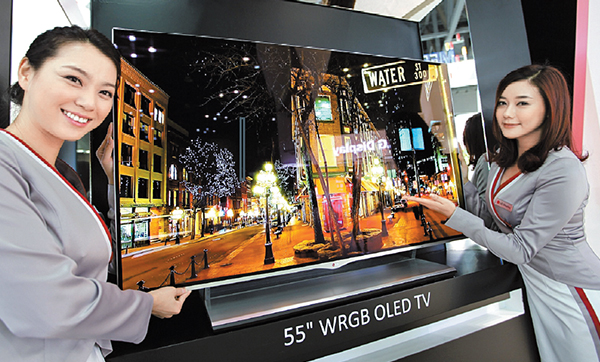 Models pose with a 55-inch OLED TV at LG Electronics’ booth during an exhibition last month at Kintex in Gyeonggi. [yonhap]


LG Electronics is moving to secure a lead against rival Samsung Electronics in the OLED (organic light-emitting diode) TV market by preparing to release five 55-inch TVs for public consumption next month, according to industry insiders.

Meanwhile, Samsung Electronics introduced eight commercially functional 55-inch OLED TVs in Korea in May but is “not ready to go into mass production on any of them yet,” according to a company employee, who requested anonymity.

If LG beats Samsung to the punch it will become the first company in the world to successfully sell on a large scale what is widely seen as the next generation of TV technology, as many believe OLED screens will eventually replace those that rely on liquid crystal displays (LCDs) and light-emitting diodes (LEDs).

OLED offers brighter colors, as each pixel has its own light source, and the screens are thinner as they do not require a backlight. They are also more responsive, offer better contrast and viewing angles and consume less power, according to industry figures.

The two companies have been competing to capture the OLED TV market as the LED TV market is already saturated.

The biggest development challenge has been improving the manufacturing yield, which plays a key role in determining the cost of the product. A low yield means there are too many sub-standard panels rolling off the production line - too much waste - which ultimately bumps up the retail price of the finished product.

“To make mass production feasible, the manufacturing yield should be above 90 percent,” said a source in the industry.

Park Yuak, an analyst at Hanwha Securities and Investment, said OLED TVs will only sell if the price difference is narrowed to within 30 percent.

“LCD TVs only started selling in a big way when prices dropped to 30 percent higher than previous products,” he said.

The 55-inch OLED TVs that are expected to go on sale this year are more symbolic than practical in nature, according to market experts.

David Hsieh, vice president of NPD DisplaySearch, speculated recently that if OLED TVs hit the market this year, the main purpose will be to put them in showrooms in developed regions like North America and Europe to whet people’s appetites, make a statement and demonstrate their technical superiority.

DisplaySearch forecasts that only 500 of the TVs will be sold this year.

Consumers have long been awaiting the arrival of the next-generation TV, and LG and Samsung have kept them on tenterhooks by repeatedly delaying their launches since announcing their plans to do so at the Consumer Electronics Show in Las Vegas earlier this year.

Previously, both companies planned to unleash OLED TVs around May ahead of the London Olympics. But as the months rolled by, the release dates were pushed far back to fall and now until the end of the year.

Skeptics still maintain this is a publicity stunt and they will not be able to launch the TVs commercially until 2014.

LG arguably has more at stake as it trails Samsung by such a large margin in the arena of smartphones.

“LG released its smartphone a couple of years ago, only six months after Samsung, but the results have been more than disappointing. Samsung now leads the global market while LG, like other global competitors such as Nokia, is still struggling despite having comparable technology,” said an industry insider.

LG was runner-up in the global market for LCD TVs with a 12 percent share as of last year, second only to Samsung.

Demand for LCD TVs is expected to grow by just 3.2 percent next year, prompting companies to slash their investment on production of LCD panels.

LG Group Chairman Koo Bon-moo has reportedly named OLED TVs as one of two priorities for the conglomerates next year along with batteries for electric vehicles.

Competition between the two rivals is already heating up as Samsung Display, a subsidiary that manufactures LCD panels, filed a lawsuit against LG Display last week for violating seven of its OLED panel technologies.

Earlier in September, LG Display sued Samsung for poaching OLED technology used in its mobile gadgets including its Galaxy S and Galaxy Tab.