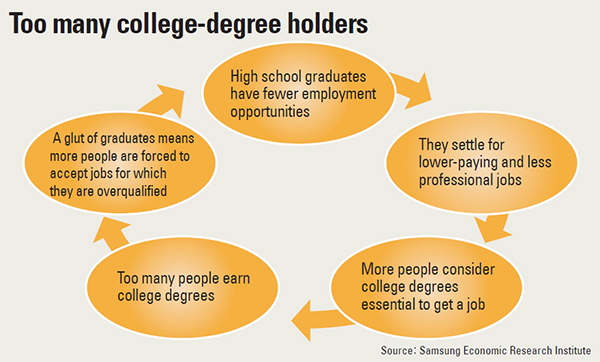 Major conglomerates have been rolling up their sleeves to establish schools of their own in an attempt to lure talented high school graduates.

After LG Electronics opened its so-called corporate college last month, Hyundai Department Store followed suit last week. Accepted students are promised to have a full-time job at the company when they graduate.

Students will spend half of their day studying regular subjects and the other half working or receiving specialized job training.

The Ministry of Employment and Labor decided to encourage conglomerates to open such schools that offer a college-level education to make the job market more accessible to those who were otherwise unlikely to pursue higher education.

“Schools like these will help recruiters focus more on the practical abilities of job applicants [rather than just looking at their educational background],” Labor Minister Lee Chae-pil said at the opening ceremony of the college of Hyundai Department Store. “We encourage large companies to build a quality labor force through operating such educational facilities.”

The ministry plans to cover at least 80 percent of the education fees. It has also given the companies the freedom to weight the content of their curricula in favor of their specific industry or niche.

Hyundai Department Store will offer up to 450 hours of classes a year focused on teaching knowledge and skills necessary for retail workers. It has already accepted 31 high school graduates and promised to hire them on a full-time basis after they complete the two-year program, which starts next year.

“I feel this is a valuable experience as the company is offering me a professional-level training in the retail industry, as well as transferable skills or subjects like chemistry, psychology and language training,” said an 18-year-old surnamed Park, one of the 31 recruits.

“As the company has promised to treat us the same as college graduates when the course wraps up, there is more of an incentive to do well.”

The corporate college also offers a graduate-school-level program specializing in marketing, setting a new precedent. All of the programs are offered free of charge. LG Electronics has decided to run 14 programs for 1,500 trainees a year. Among these, one focuses on the company’s suppliers to explore ways to cooperate for shared growth. It also offers classes for current LG employees to promote greater efficiency.

It said it may add more programs later on. “It is a pleasure to share our training know-how with society,” said Lee Young-ha, head of the company’s management support division.

The ministry said too many students are spending vast sums of money to attend regular colleges where they learn skills that prove to be of little or no use to them after they graduate.

“About 42 percent of college graduates did not have to go to college, and each of them is [wasting] 120 million won [$110,553] to graduate from a four-year college program, according to a report from Samsung Economic Research Institute [SERI],” said Park Seong-hee, managing director at the Labor Ministry’s skills development policy bureau.

A college degree is widely viewed as a guarantee of success in Korea, but this is longer necessarily the case as the job market contracts while college graduates multiply and the economy continues to cool.

In such a system, vocational colleges and those now being set up by the chaebol are seen as a sensible step. “We have to build alternative routes to success to stop this vicious cycle and give students who don’t go to university a chance of finding a job,” the SERI report stated.

The ministry is preparing to open up to eight more corporate colleges this year. “We want to show job seekers who only have a high school education that they can still pursue higher education while working,” said Park Sang-yoon, an official at the Labor Ministry’s human resources department.

One drawback is that corporate colleges do not award an official degree, so it is no guarantee of getting a job at companies outside the one sponsoring the school.

“If the colleges awarded regular degrees it would be very hard for them to teach the students the kind of skills the [sponsoring] companies demand and need,” said Park at the ministry.

There are currently three in-house colleges operating at conglomerates, including one at Samsung Electronics that uses a curriculum which does merit an official college degree.

“We thought the companies deserved the right to produce their own training programs to grow the kind of work force most suited to the tasks they need to get done,” said Park.