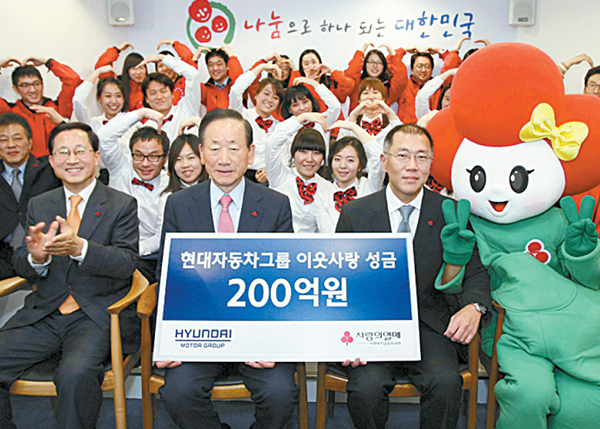 The company, which has Hyundai Motor and Kia Motors under its wing, said it gave an additional 5 billion won compared to 2011.

Chung Eui-sun, vice chairman of the group and son of Chairman Chung Mong-koo, visited the charity’s headquarters in Seoul yesterday and handed the pledge to CCK President Lee Dong-kun.

“Hyundai Motor Group decided to increase its donation as we want to help more people,” Chung said. “We will pursue more corporate social responsibility [CSR] activities in the future as a global company.”

The conglomerate said it has donated 109 billion won to the CCK since 2003.

Under the slogan “Moving the world together,” the group said it is focusing on four themes to reinforce its CSR activities: providing transport for people with disabilities, promoting a culture of safe driving, preserving the natural environment and encouraging volunteerism.