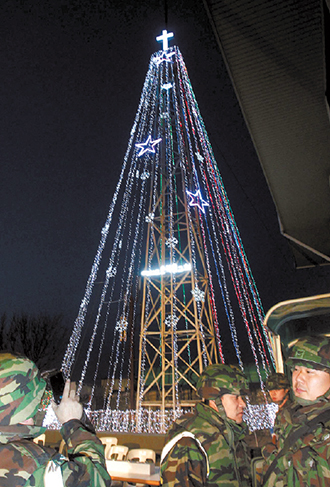 A tower was decorated as an illuminated Christmas tree on Dec. 21, 2010, at Aegibong in Gimpo, Gyeonggi, near the Demilitarized Zone. [JoongAng Ilbo]

A Christian group wants to light up some structures near the Demilitarized Zone to celebrate Christmas and show the light of the Lord to North Korea.

The Military Evangelical Association of Korea has asked the Ministry of National Defense to allow it to set up Christmas lights in three border regions, including Aegibong and the Unification Observatory in Goseong County, Gangwon.

“We can’t tell you the detailed schedule or plans,” an official of the association told the JoongAng Ilbo. “As soon as the ministry allows us to do it, we will hold a lighting ceremony and light the 30-meter tower tree on Aegibong for the first time in two years.”

Both Aegibong and the Unification Observatory are about 2.5 kilometers (1.5 miles) from the Military Demarcation Line so they are visible from Kaesong.

The lighting displays were common before the “Sunshine Policy” of engagement of North Korea by the liberal administrations of Kim Dae-jung and Roh Moo-hyun. They were stopped in 2004 after North Korea reportedly requested that the Aegibong tower be dismantled when all forms of propaganda were halted at the border.

The Aegibong tower was lit before Christmas 2010 after the sinking of the warship Cheonan in March of that year and the deadly shelling of Yeonpyeong Island in November.

The Christian group said it cancelled the event last December after the death of North Korean leader Kim Jong-il.

In October, tensions ran high in the border city of Paju, Gyeonggi, when a group of civic activists attempted to send anti-Pyongyang propaganda leaflets over the DMZ using large balloons. North Korea threatened a war in response, and the activists were blocked by policemen.

Residents of Gimpo formed an emergency committee to protest the Christian group’s plans and staged a rally last week.

“If they light the tower on Aegibong, it could lead to a revival of anti-North Korean propaganda warfare ahead of the December presidential election,” a resident said. “The Ministry of National Defense should not authorize the lighting because it could also provoke a military confrontation.”

Some residents say if the ministry allows it, they will block the entrance to the peak themselves.

“We are planning to ask the ministry not to allow it,” a city government official said.

“Aegibong used to be a tourist spot for those who came from North Korea,” said Lee Jeok, a resident who is leading the emergency committee. “Now it’s becoming a kind of militarized region.”

Facing the protest, however, the Christian group called off its plan for the lighting event.“The Christain group withdrew their plan, althought they didn’t say why,” a defense ministry official said. “But the decision seems to have come after recent protests from local residents.”