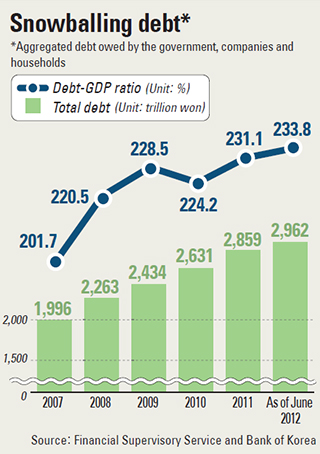 Korea’s total debt reached 233.8 percent of GDP as of June, the Financial Supervisory Service said in a report yesterday that set alarm bells ringing and highlighted the need for efforts to rein in corporate and household debt so the country doesn’t follow in the footsteps of Spain and Italy.

The financial watchdog was referring to the combined national debt owed by the government, companies and households.

The total debt-to-GDP ratio of Asia’s fourth-largest economy stood at 152 percent in 2000 but began climbing rapidly from 2007, when the global economy started to reel from a series of global financial crises emanating from the United States and, later, in Europe. 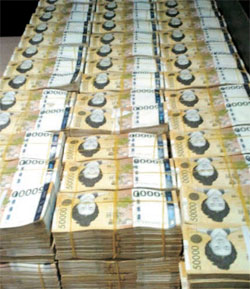 However, this is not to be confused with its government debt to GDP, which at around 34 percent ranks Korea as one of the best-performers among OECD members.

In a report, the FSS described the total debt-to-GDP ratio as one of the most reliable gauges indicating the health of the economy.

“Although the scale and pace of the ballooning [total] debt-to-GDP ratio doesn’t pose a high risk yet, the level of household and corporate debt should not be taken lightly,” said an official at the FSS. “If conditions worsen, the government may have to intervene and shoulder the burden.”

In contrast, Spain and Italy have seen their equivalent ratios accelerate at a much faster pace.

“International appraisers raised Korea’s sovereign rating because they concluded the country is capable of managing risks after reflecting its government debt-to-GDP ratio,” said an FSS official. “But that doesn’t necessarily mean that household debt and corporate debt received good marks.”

The FSS highlighted the growing uncertainty in the local financial market due to massive foreign capital flows originating from Europe.

“The financial sector needs to boost its ability to absorb losses as it is likely that [total] debt will grow in tandem with the sluggish economy,” the report said.