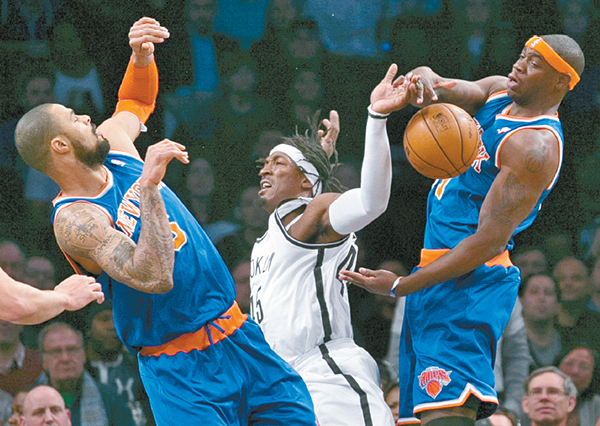 
NEW YORK - They share a city, first place and now the belief that this new-look, New York matchup could be a real rivalry.

And what a stirring start to it for the Nets and Knicks.

The Nets won the crowd - and the game - in the first meeting in Brooklyn, pulling out a 96-89 overtime victory on Monday night to tie the Knicks atop the Atlantic Division on a breakthrough night for their franchise.

“It was absolutely fantastic. It was a great game for the fans,” Nets center Brook Lopez said. “Having two great teams in New York, the fans are in the best position of all.”

With their fans outnumbering and at times outchanting the Knicks’ counterparts for a change, the Nets improved to 7-1 in their new home before a sellout crowd of 17,732 that was more black than blue, just the way the Nets hoped.

“Every time some sort of Knicks contingency started to cheer, our fans got louder,” Nets coach Avery Johnson said.

Jerry Stackhouse, wearing the No. 42 Jackie Robinson made famous in Brooklyn, hit the tie-breaking 3-pointer with 3:31 left in overtime as the Nets controlled the extra period of a playoff-like game that neither team led by more than seven.

Lopez had 22 points and 11 rebounds, and Deron Williams added 16 points and 14 assists as the Nets joined the Knicks at 9-4 amid a loud chant of “Brook-lyn! Brook-lyn!” at the finish. Stackhouse scored 14 points.

Carmelo Anthony had 35 points and 13 rebounds, but was only 10 of 16 at the free throw line and missed the potential go-ahead jumper with about 5 seconds left in regulation. Tyson Chandler finished with 28 points and 10 boards, but no other Knicks player was in double figures.

“They’re across the bridge. They’re here in Brooklyn. We’re in the city. They’re in the same division, the same sports town. I guess you can say this started something,” Anthony said.

Raymond Felton was just 3 of 19 from the field, but the Knicks had to stick with him with fellow point guard and former Nets star Jason Kidd out with back spasms. Another starter, Ronnie Brewer, was lost for the overtime with a dislocated left ring finger.

“I’m upset at myself. I had a bad shooting night,” Felton said. “I’m probably just as mad as any fan, any player, anybody you could think about.”

The first matchup of Brooklyn and New York pro franchises since the Dodgers played the New York Giants on Sept. 8 1957, at the Polo Grounds was loud, energetic and close throughout. Both teams played as if this meant more than the usual regular-season game.

“It was just a total 180 from what we saw last year, where it was mostly Knicks fans and all the chants and all the cheers were for them. It’s great to feel that we have a home-court advantage finally,” Williams said.

“This was a playoff-type atmosphere. You could definitely feel it on the court and it was a great game to be a part of.”

The game was originally scheduled as the Nov. 1 season opener for both teams but was postponed after Hurricane Sandy, when much of the mass transit around the city was knocked out.