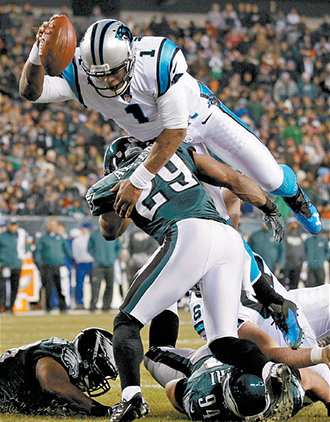 PHILADELPHIA - This was the Cam Newton who was the talk of the NFL last season.

Newton threw for two touchdowns and ran for two more to lead the Carolina Panthers to a 30-22 victory over the Philadelphia Eagles on Monday night in a matchup of teams with the worst records in the NFC.

Newton, who hadn’t played up to his sensational rookie season, showed no signs of a sophomore slump against Philadelphia’s porous pass defense. He finished 18 of 28 for 306 yards and had a passer rating of 125.

“I think my best game is still to come,” Newton said. “I’m still focused on getting better each and every week.”

Bryce Brown set a club rookie record with 178 yards rushing, including TD runs of 65 and 5 yards, but the Eagles (3-8) still lost their seventh straight game.

Brown, filling in for injured running back LeSean McCoy, surpassed Correll Buckhalter’s rookie mark of 134 yards rushing in his first start since his senior year at Wichita East High School in 2008. But Brown also lost two fumbles, including one in Panthers’ territory.

Fellow rookie Nick Foles was so-so in his second straight start for Michael Vick, who also sat out with a concussion. Foles was 16 of 21 for 119 yards.

“The most important thing for me was for us to get the win and that didn’t happen tonight,” Brown said. “I felt like a lot of that had to do with my two turnovers. It really, really cost us.”

Then the Panthers finally stopped Brown when it mattered most, stuffing him on a fourth-and-1 to take over on downs at their 40. Newton led them downfield, running in from the 2 to make it 30-22. Gano, signed last week, missed the extra point. But Brandon Boykin fumbled after a 44-yard kickoff return, the Panthers recovered and held the ball the final 4:29.

“It’s been a long time in coming,” Panthers coach Ron Rivera said. “Lots of people contributed and made plays. Real proud of what we did and the things we did to give ourselves a chance to win.”

Newton, the No, 1 overall pick in the 2011 NFL draft, lived up to the hype by throwing for 4,051 yards with 21 TD passes and 14 TDs on the ground in his first year. He entered this game with only nine TD passes and four TDs rushing, a major disappointment for Panthers fans.

But Newton outshined a rookie seventh-round pick in his Monday night debut.

“We took some plays off his plate and really tried to balance it out and spread it among other players and he has really responded very well to those things,” Rivera said. “I think we had to interpret it as giving him a breath once in a while. These last few weeks, he’s played like the guy we believe he could become.”

Newton had a 24-yard TD toss over the middle to a wide-open Gary Barnidge for a 7-3 lead.

He connected with Brandon LaFell on a 43-yard pass to make it 14-3 later in the first quarter. LaFell was wide open on the play, taking advantage of another breakdown in coverage in the secondary.