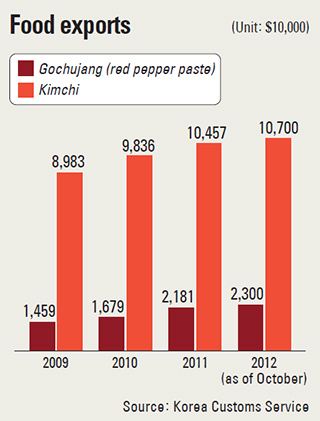 Exports of Korean traditional food products such as gochujang, or red pepper paste, and the spicy, fermented vegetable side dish kimchi have increased as they piggyback on the success of the Korean Wave, according to an analysis of 27 food companies by Korea Customs Service yesterday.

Kimchi exports until October this year recorded $88.8 million. The amount has been steadily rising since 2009, with a 19.7 percent increase in three years.

The government-run customs service projected that if this trend continues, exports this year will beat last year’s $107 million.

Kimchi exports have risen from $89.3 million in 2009 to $104.5 million last year. Growth in gochujang exports has been even steeper.

They jumped 57.6 percent from 2009 to hit $19.1 million as of October this year and are expected to add another $4 million by the end of December.

Industry figures cite the popularity of Korean culture overseas, including dramas, movies and K-pop songs, for the booming exports of traditional Korean food.

“Demand for Korean food has been formed among fans of Hallyu, or the Korean Wave, who often see Korean food in TV dramas,” said an official from the food industry. “The increasing number of tourists who visit the country is also helping sales.”

Chongga Kimchi, a local brand, received positive feedback after introducing kimchi made using squid in 2010 to appeal to Japanese consumers’ tastes. The company also signed a sales contract with Canada’s largest discount store Safeway to supply its kimchi products starting at the beginning of this year. It is now supplying to over 200 stores.

It began selling them at 110 stores of Japan’s major distribution channel Ion Hokkaido and Mami Mart and plans to expand the number of stores to 3,000 by next year. “Haechandle will target the growing K-food market in Japan by developing unique features of Haechandle,” said Chae Min-soo, who works for CJ CheilJedang.