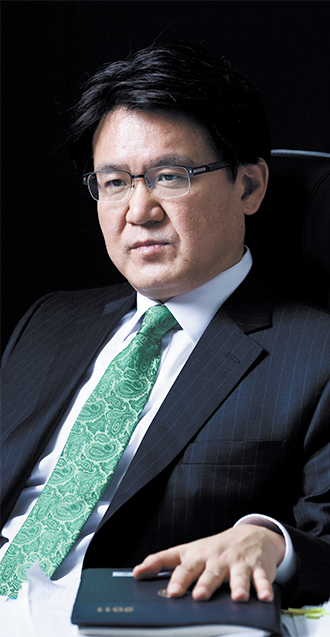 Hwang Woon-ha chief of investigative planning at the NPA

Since the criminal procedural code - which gives the prosecution jurisdiction over all police investigations - was revised in January, the two investigation agencies have come into conflict numerous times over how to handle criminal cases.

This tug-of-war peaked when the prosecution began investigating Kim Gwang-jun, a senior prosecutor of the Seoul High Prosecutors’ Office, who the police were investigating on suspicion of taking 970 million won ($896,000) won in bribes from Eugene Group, a construction company, and from Cho Hee-pal, a pyramid scheme con artist.

At the center of the calls to further revise the code to avoid such conflicts of interest stands Hwang Woon-ha, chief of investigative planning at the National Police Agency (NPA). The JoongAng Ilbo conducted an exclusive interview with Hwang on Nov. 15.

Q. The prosecution has ramped up its probe into Kim by appointing 13 prosecutors to the team of special prosecutors.

A. A team of special prosecutors shouldn’t have been formed in the first place. The country didn’t give strong legal authority to the prosecution to use it for protecting their own men. They have snatched a case that the police were investigating. They are wasting taxpayers’ precious money.

Why do you think this is happening?

They [the prosecution] must think that it is absurd as well as shameful if a prosecutor gets detained by the police. They are just trying to protect their organization and dampen public sentiment by incapacitating the police’s investigation. Their response to the case runs contrary to the spirit of the Constitution, which says, “Everybody is equal before the law.” The statement could probably now be changed to, “All men are equal before the law - except for prosecutors.” The prosecution has broken the spirit of the constitution and the rule of law in this case.

Do you think the prosecutors will run investigations fairly in Kim’s case?

Considering it has now caught the public eye, it would be hard for them to close the case without producing a reasonable outcome. They may think they are experiencing a crisis by arresting one of their colleagues, but the public will demand they reform their organization.

The Supreme Prosecutors Office suggested a joint meeting to discuss the current jurisdiction over criminal investigations, but it is hard to see if any progress has been made.

This is just a gesture to show that they’re consulting with the police on the issue in order to calm the public. The police can’t sense the prosecutors really intend to solve the problem.

It seems like the police have lost their battle with the prosecution in Kim’s case.

We’ve been forced to give up the case because the prosecution has the authority to run investigations, as well as the right to make indictments and request warrants. We do not have any other way of running an investigation, and the suspects we wanted to question are ignoring our summons. It feels like the prosecution is running a flat course in a marathon while we’re trying to cross mountains and rivers.

What are the police are going to do with Cho Hee-pal?

We will continue investigating allegations that the prosecution has not probed yet. But it is hard for us to do because we never know how they will expand their investigation against Cho. We will monitor the team of special prosecutors’ as they continue their probe. We can’t just give up on this case.

There are unverified rumors that Cho was being protected by government officials and politicians. Have you found any clues?

The police have looked into a total of 740 bank accounts and found 78 billion won [$71.8 million] of Cho’s hidden assets. We found some transaction records between Cho and civil servants but we couldn’t find any evidence proving that he was being protected by government officials. We recently obtained intelligence about a group of Cho’s aides, including a man surnamed Kang who has been managing Cho’s funds. We identified that Kang currently lives in China.

The prosecution says the police are only interested in Kim’s case because they want to arrest a prosecutor.

The NPA is trying to find the people behind Cho and his hidden assets. We launched the investigation because we have obtained intelligence that Cho is staying in China. We didn’t target prosecutors. Kim’s name came up while we were tracing Cho’s hidden assets.

In May, the police announced that Cho died in China. Is this not true?

The statement was made based on a medical certificate of death that was submitted by Cho’s family. But we never said we were 100 percent sure about the veracity of this. We’re trying to ascertain whether he’s alive or not, and we’ve asked the Chinese police to verify the medical certificate of death that was issued by a Chinese hospital. We still haven’t heard anything from China.

There are people who don’t trust the police investigation of Cho because some officers involved in the case were arrested for taking bribes.

We are fully aware about these concerns, but this is a very serious case that the entire nation is watching closely. We recently arrested some officers for taking bribes from Cho. We will deal with Cho’s case in all fairness, as we always do. But I want to ask the prosecution whether they ever looked into the corruption charges leveled against their own colleague before the case was made public by the police and media.

Police have attempted to investigate corruption cases involving prosecutors on several occasions, but they always rejected our requests for warrants to confiscate materials and make arrests. About a dozen cases have been distorted or suppressed every year. When the criminal procedural code was being revised, the police strongly urged the government to provide a measure that would prevent prosecutors from disrupting the police probes into their affairs. But our request were totally ignored. Then, as soon as we launched an investigation into an incumbent prosecutor, the prosecution formed a team and snatched away the case from under our noses.

Did the prosecution interfere with cases that were being directly managed by the NPA?

The Intelligence Crime Investigation Team under the NPA has been investigating several cases that involve politicians and corporate officials, but a number of people on the team believe the prosecutors are meddling much more this year than in the past, and they now routinely reject our requests for warrants.

Why do you think this is?

Because they think that investigating high-ranking government officials, politicians and corporate bigwigs is the exclusive jurisdiction of the prosecution. They fear they could lose their standing as an investigative agency if they keep allowing the police to take charge of such high-profile cases. The police are the only investigative agency that can fairly look into cases of corruption involving prosecutors, but they merely view the police as a subordinate agency to do their unwanted chores.

What would be the best way forward amid this impasse?

We are not demanding the prosecution hand over their entire jurisdiction to the police. They always claim they see us both as equals in terms of investigative agencies, but in fact, they treat us as a subordinate agency and bark out commands as though they are controlling a platoon of soldiers. The police and prosecution must build a relationship of mutual respect. Then the role and jurisdiction of each agency needs to be revised and clarified.