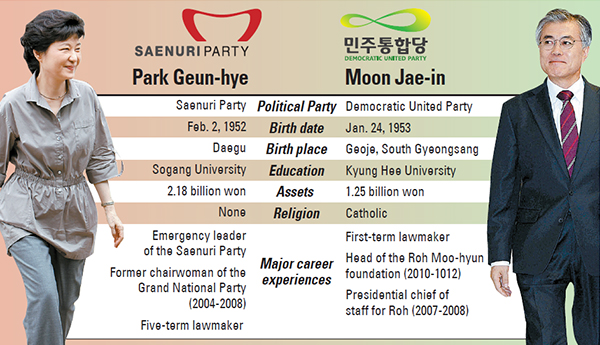 As the Dec. 19 presidential election has boiled down to a contest between one main conservative and one main liberal candidate, the contrast between the campaigns of Park Geun-hye of the ruling Saenuri Party and Moon Jae-in of the opposition Democratic United Party has become more evident than ever.

What are the campaign slogans?

While the campaigns officially started yesterday, Park has long promoted the idea that she is prepared to become the country’s first female president.

“The voters must choose a candidate who is prepared to run the country,” she said on Nov. 18. “With the delicate yet strong mind of a mother who protects a family, I will protect this country.”

She also stressed that electing a female president for the first time will also bring about unprecedented changes.

Moon highlighted the slogan of “future” in his campaign. Rhee Mok-hee, chief planner of the campaign, said yesterday that the election will be a competition between the past and the future.

“This is a matter of going forward to the future with Moon or staying in the past with Park,” he said.

Who is leading their campaigns?

Park, who won the party primary first, created her campaign with key associates and outside experts. Kim Moo-sung, Park’s longtime ally and former Saenuri floor leader, is the center of her campaign. After joining the camp early last month, Kim managed to show strong organizational skills to push forward the campaign and recruited many non-Park allies.

Ahn Dae-hee, former senior prosecutor appointed to lead Park’s political overhaul, is her campaign’s symbol of reform. After Ahn Cheol-soo, a liberal political icon, dropped out of the race amidst a bitter negotiation with Moon to merge their candidacies, Ahn Dae-hee vowed to win over Ahn’s supporters by promising that Park will enact Ahn’s reform agendas.

Han Kwang-ok, a key Kim Dae-jung loyalist, is also an important member of Park’s campaign as Park has promoted the “grand national unity” vision to mend the generational and ideological divides.

Kim Chong-in, the architect of Park’s economic democratization pledges, practically stepped away from the campaign after some discord with her associates.

Nicknamed “the Furnace,” Moon’s election campaign committee is a mixture of people from the DUP, civic groups and academia.

While his associates who served in the Roh Moo-hyun government with him started as key members, non-Roh loyalists emerged largely during the process of Moon’s presidential deal with Ahn Cheol-soo, as Ahn demanded strong political reform within the DUP.

Representative Noh Young-min is Moon’s chief of staff and he is in charge of the candidate’s scheduling, messages and even wardrobe. All briefings to Moon go through him during the campaign.

Kim Boo-kyum, co-chairman of Moon’s campaign, is particularly focusing his efforts on expanding Moon’s popularity in Daegu and North Gyeongsang, the traditional stronghold of the Saenuri Party.

Representative Park Young-sun, a co-head of the committee, emerged as one of the most influential strategists as she earned the special trust of Moon. During the negotiation with Ahn, Park was Moon’s chief negotiator.

Battle between the conservative and the liberal

Both Park and Moon are supported by influential figures in the conservative and liberal spectrums.

Park is largely supported by the established politicians from the conservative spectrum. Lee Hoi-chang, two-time presidential candidate of the Grand National Party, the predecessor of the Saenuri Party, recently declared his support for Park.

Representative Chung Mong-joon, a senior member of the Saenuri Party, is a co-chairman of Park’s campaign and he gave stump speeches in Seoul yesterday to assist her.

After his primary defeat, Sohn stayed away from Moon’s campaign for two months, but the two met Monday and agreed to cooperate. Since he served as the governor of Gyeonggi, Sohn will focus his efforts in the capital region.

Lee Hae-chan, who stepped down from the DUP chairmanship during the liberal candidacy merger process to satisfy Ahn Cheol-soo’s demand, will also support Moon’s stumping in Seoul and his home province of South Chungcheong.