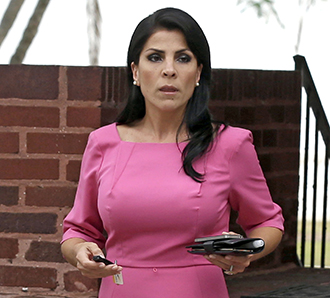 Jill Kelley, a key figure in the scandal involving former Central Intelligence Agency Director David Petraeus, will be stripped of her title as “honorary consul” for Korea in the United States, a senior government official said on Monday.

“We plan to revoke Kelley from her title soon,” Kim Kyou-hyun, deputy foreign minister, told Korean reporters at a luncheon in Washington. “It is inappropriate to the status of an honorary consul that [she] sought to be involved in commercial projects and peddle influence.” Kim is currently visiting the U.S. for regular consultations with officials there after President Obama was re-elected.

It is the first time that a senior government official from Korea has touched upon the issue while there was speculation that Kelley would lose the title of honorary consul after the scandal involving Petraeus broke early this month.

Kelley, 37, a socialite from Tampa, Florida, contacted the FBI after receiving threatening e-mails telling her to stay away from Petraeus, her long-time friend whom she met at parties around the Tampa area. It turned out that the e-mails were sent by Petraeus’ biographer Paula Broadwell, who was having an affair with him.

After Petraeus resigned, Kelley was questioned about e-mail correspondence with another top U.S. commander, Gen. John Allen, and she invoked her honorary title when she called police on Nov. 11 to complain about reporters besieging her home.

According to various sources, Kelley misused her title as Korean honorary consul by raising it in unspecified personal business dealings.

Also, though honorary diplomats have no specific privileges under the 1961 Vienna Convention on Diplomatic Relations, sources say she was found to be driving a Mercedes sedan with a license plate that said “Honorary Consul 1JK.”

Sources said she requested large sums of money from an American businessman, offering to mediate a large energy project deal promoted by Korea.

Kelley, one of the 15 honorary consuls in the U.S., who gets paid $2,500 a year, was appointed upon request by Petraeus, who recommended her to Han Duk-soo, former Korean ambassador to the U.S. and now the chairman of the Korea International Trade Association (KITA).

According to sources, before leaving the U.S. in February, he asked the Korean consulate office in Atlanta to consider appointing her as honorary consul as she is active in organizing public events and arranging meetings with influential politicians and businessmen in the area.

“When chairman [Han] visited Tampa when he was serving as U.S. ambassador, he met Kelley, and she told him that she would like to contribute in the Korea-U.S. economic cooperation,” said an official from KITA, without elaborating on the details.