Naro can take off as early as tomorrow afternoon

Naro can take off as early as tomorrow afternoon 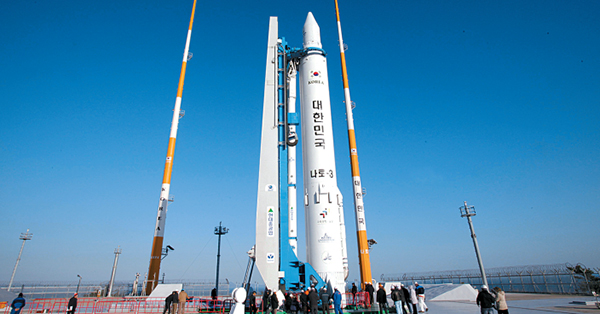 The Korea Space Launch Vehicle-1, also known as Naro, is erected on its launchpad at the Naro Space Center in South Jeolla yesterday. [NEWSIS]


After a month’s delay for repairs, the Korea Space Launch Vehicle-1 (KSLV-1) was transported to a launchpad at the Naro Space Center in South Jeolla yesterday, and it is scheduled to be launched tomorrow.

The Ministry of Education, Science and Technology said that the KSLV-1, also known as the Naro rocket, was transported from its assembly complex to the pad at the space center in Goheung County yesterday at 9:31 a.m. Naro was then connected to the cable mast, which links electric wires and gas pumps to the rocket, and fastened to the erector of the launchpad, setting it upright and readied for blast off.

The Korea Aerospace Research Institute (KARI) said it will do a final inspection and launch rehearsal, a process that takes 12 hours, today for the Naro, the third two-stage rocket built by Korean and Russian engineers after two failed launch attempts in 2009 and 2010.

The rocket is expected to be launched tomorrow afternoon between 4 p.m. and 7 p.m. if everything goes according to plan. The Naro is carrying a 100-kilogram (220-pound) research satellite that was developed by the Korea Advanced Institute of Science and Technology. Many factors play into the launch of a rocket, including the weather and conditions in space. The window to launch the rocket extends until next Wednesday. 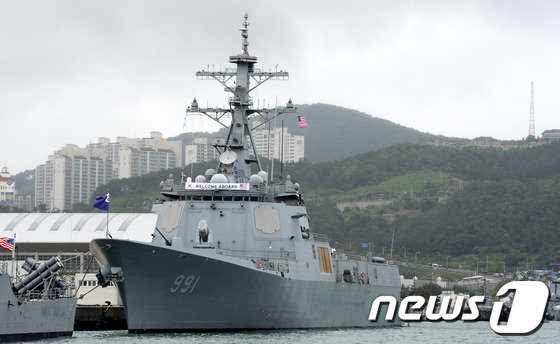 The original countdown for this third attempt to hoist a satellite into orbit on Oct. 26 was stopped several hours before scheduled liftoff when a helium leak was found because of a broken rubber seal in the connector between the rocket and its launchpad. This discovery came after a successful final inspection and rehearsal run the day before. Since then, a new linking mechanism was sent by Russia, and KARI said it has been successfully replaced.

This will be the last attempt to launch a version of the Naro rocket into space, according to the Ministry of Education, Science and Technology, though Korea will continue its space development program regardless of whether the liftoff is a success or a failure.

For the first time, the Korean military deployed two Aegis destroyers equipped with advanced radar systems to track and guard the Korea Space Launch Vehicle-1 after it takes off. The radar systems can monitor targets as far as 1,000 kilometers (620 miles) away.

If Korea finally succeeds in putting the satellite at least 302 kilometers above earth and into orbit, it will become the 10th country in the “space club,” which includes neighbors Japan and China.