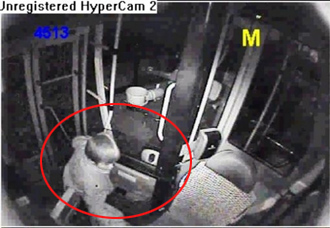 The Seoul Seobu Police Precinct reported yesterday that it detained the prime suspect surnamed Kang for stealing and driving three green maeul, or village, buses without a driver’s license and booked two of his friends without physical detention as accomplices.

At around 2:00 a.m. on Nov. 15, the trio snuck into a bus depot in Eunpyeong District, northern Seoul, and got on an unlocked bus parked there. They found a bus key on the driver’s seat and tried to drive the vehicle out of the parking lot. But with no experience driving buses, Kang smashed into another bus parked in the area.

After the minor collision, the three teenagers got on another bus and began driving toward Seoul Station in Jung District, central Seoul, with a plan to rob a cafe near the station.

Their plan was thwarted when they saw a joint military-police checkpoint less than five minutes after they left the parking lot.

Kang tried to turn away from the checkpoint but hit another vehicle on the side of the road. After the second crash, the trio walked back to the bus depot.

Choi and Jeong gave up and slept in an empty bus in the lot while Kang broke into another bus.

He then drove about 18 kilometers (11 miles) home to Ilsan, Gyeonggi, where he abandoned the bus near his house.