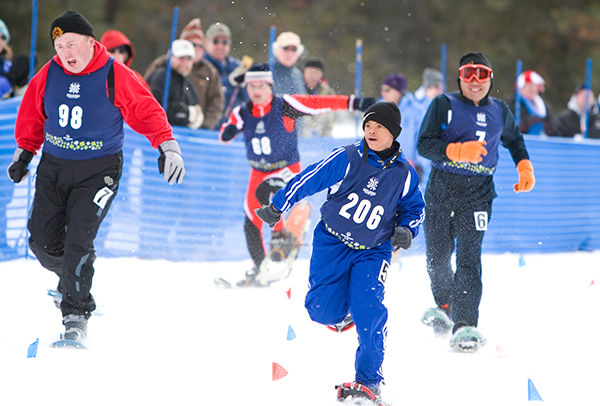 
The Special Olympics World Winter Games, the world’s biggest winter sports event for those with intellectual disabilities, has started a two-month countdown to its start in Korea’s winter resort city of Pyeongchang.

About 3,300 people, including 2,500 athletes from more than 120 countries, are scheduled to participate in the eight-day Pyeongchang event beginning on Jan. 29. According to the organizers, the large number of participants will make it the biggest gathering since the Games launch in 1968.

It is the first time for Korea to host the Special Olympics World Games, although the smaller and more frequent Special Olympics have been held in the country several times. Pyeongchang is the third Asian host of the World Games after the 2005 World Winter Games in Nagano and the 2007 World Summer Games in Shanghai.

The Special Olympics, however, are less focused on competition but more on participation, differing itself from the Paralympics, the disabled version of the Olympics.

Medals are awarded in the Special Olympics, but there is no medal count announcement. In addition to the top three athletes, those finishing fourth to eighth places also stand on the podium and receive participation ribbons.

“They try to find meaning in the challenge itself, rather than the results or records.”

The Pyeongchang event, to be held under the slogan “Together We Can,” will also try to enhance mutual understanding between the disabled and those who are not, the organizers said.

A world youth meeting, one of the side events, will bring together intellectually challenged youth and able-minded youth in Pyeongchang.

Around 89 international youths will attend the 10-day event to be held starting Jan. 27.

Na said she will focus the event on leaving a long-term legacy for Korea.

“Our society has to mature enough to accept the intellectually challenged as its ordinary members, wave hands to them in greeting and don’t look at them twice,” Na said.

“Besides, the intellectually challenged should be given sufficient rights to work and be educated.

“I think the Special Olympics can truly succeed when we are able to make these kind of changes happen.”

To encourage more people to watch the event, the organizing committee said it will sell all-in-one tickets for 10,000 won ($9.2).