The oil painting “The Table of Monet,” far left, By Nam Kyoung-min and the “Present” by Hong Kyoung Tack are part of the “Art of Painting” show at Hakgojae Gallery. Provided by the gallery


Why are paintings still being made in the era of photography and various new media (which make even photos seem like old media)? That was the question that prompted Lee Jin-suk, an art critic, to curate a group exhibition titled “Art of Painting” currently at Hakgojae Gallery.

The five artists participating in the show - Chung Sue-jin, Hong Kyoung Tack, Lee Dongi, Nam Kyung-min and Seo Sang-ik - are in their late 30s or early 40s with relatively strong positions as painters.

These people have built careers of as long as 20 years as painters, though they are in generations familiar with new media.

“So I have asked them ‘why do you paint?’ and ‘what is the reason behind the enduring value of paintings in the 21th century?’?” Lee said during a press preview earlier this month.

“Well, we have bodies and there is no better genre than painting for expression of senses felt and remembered by bodies,” said Seo. He is known for paintings that realistically depict partly surrealistic scenes in mundane everyday settings. “Paintings can deliver the senses through the images that are ambiguous, unbalanced or cracked.”

That could be true for not only Seo’s paintings, but Nam’s as well. Her paintings depict interiors of bright colors in which famous paintings by old masters or modern artists are hanging. As for “The Table of Monet,” it is ambiguous whether the French Impressionist’s famous “Terrace at Saint-Adresse” in Nam’s painting is just a painting or a window open to an actual terrace - a Monet world.

Lee Dongi, one of the best-known Korean pop artists, is presenting paintings in very different styles from his earlier ones for this exhibition.

He is known for paintings featuring the character Atomaus, which he created by combining Atom (Astro Boy), the boy robot hero of Japanese anime, and Mickey Mouse of U.S.-based Walt Disney. 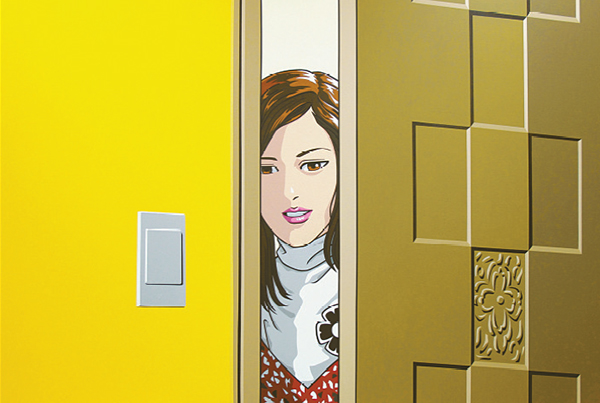 The acrylic painting “Woman Opening Door,” above, by Lee Dongi is also part of the exhibition.


But some of his paintings in this show have no Atomaus in them. One of them shows a girl behind a partly-open door, which looks very familiar, somehow.

“It depicts a cliche scene which I have seen from numerous Korean TV dramas,” the artist explained. “I plan a series about the cliches in Korean dramas, which led the so-called Korean Wave before the rise of K-pop.”

Hong, who is one of the most popular Korean artists overseas, also shows some paintings that deviate from his signature styles. He has been best known for paintings which are crowded with pens, books or other objects of vivid colors. But this time, he shows a series of calm paintings depicting a hand juxtaposed with an ominous mood that recalls Western traditional Vanitas (vanity) still-lifes carrying “Memento Mori” (“Remember your Mortality”) messages.

“This exhibition surely will be the event to spot the well-known artists’ change and revolution,” said curator Lee.