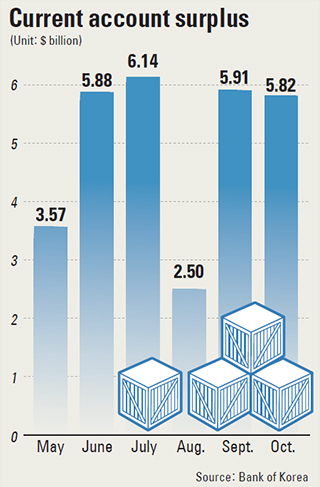 The nation’s current account balance not only posted a surplus for the ninth consecutive month, but the accumulated surplus in the first 10 months of this year has already surpassed the central bank’s target.

Rising exports in October on-month were the biggest contributor, while imports grew at a slower pace.

The announcement was made in the wake of a spate of gloomy outlooks for next year’s economic growth by major institutions including the Korea Development Institute (KDI), a government think tank, and the Organization for Economic Cooperation and Development (OECD).

In the first 10 months, the cumulative current account surplus reached $34.13 billion, surpassing the central bank’s estimate of $34 billion.
The BOK expects to also see a healthy surplus this month.

“The trend is likely continue in November on the back of growing exports of petrochemical goods and telecommunications products,” Yang Jae-ryong, director of the BOK’s monetary and financial statistics division, said at a press conference.

Despite slowing economic growth, the local currency has appreciated more than 6 percent to the dollar so far this year as foreign capital is flowing into Korea in the wake of quantitative easing by major economies such as the United States.

Korea’s goods balance logged a surplus of $5.21 billion in October, down from a revised $5.49 billion the previous month, the BOK added.
Exports and imports both gained ground in October, easing concern about weak exports dragged down by the global slowdown and tepid demand at home.

Yang said that exports seemed to recover after two weak quarters due to a high comparison base last year, when exports got a boost from the fallout of the earthquake and tsunami in Japan.
“A pickup in imports of capital goods can also be seen as indicating that investment is recovering,” Yang said.

However, it is debatable whether such a bullish trend will continue as Korea’s economic growth is expected to decelerate.

The announcement about the current account surplus was made a day after the OECD shaved 0.9 percentage point from its previous forecast of next year’s anticipated growth to 3.1 percent. It also lowered its projection for this year by 1.1 percentage point to 2.2 percent.

The OECD attributed the lowered outlook to slowing trade. On Sunday, the KDI also lowered its outlook for next year to 3 percent, down 0.9 percent from its earlier estimate.

Meanwhile, the capital and financial account, covering cross-border investment, posted a net outflow of $7.27 billion last month, larger than a net outflow of a revised $4.93 billion the previous month, the central bank said.