Korea unlikely to hold off on revising bank rules

Korea unlikely to hold off on revising bank rules 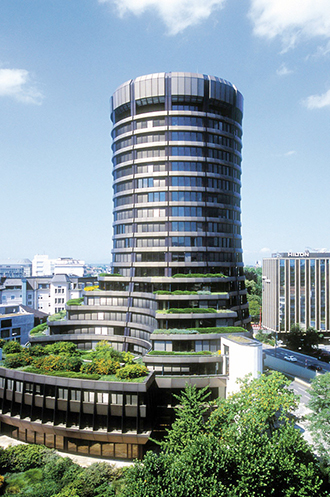 With the European Union mulling whether to follow the United States in delaying the introduction of stricter rules on bank capital, known as Basel III, attention is now shifting to whether Korea will take a similar path.

Basel III, which is set to take effect from Jan. 1 in Korea, Japan, China, Singapore and Thailand, is named after a global accord made by 27 member countries of the Basel Committee on Banking Supervision in October 2010.

The latest landmark banking reform deal is aimed at beefing up capital buffers so that banks will be more resilient to financial shocks in order to prevent future financial crises like what happened after the collapse of Lehman Brothers in the U.S. in 2008.

In response to growing speculation that Korea may follow in the footsteps of the U.S., an official at the Financial Supervisory Service (FSS) who is closely involved in introducing Basel III to the country told the Korea JoongAng Daily that Korea is preparing to introduce Basel III next year as planned.

The U.S. Treasury said on Nov. 9 that it would not implement the Basel III rules in January, claiming that U.S. banks are not yet ready for the move.

“Korea is ready for Basel III,” said an official at the FSS. “Unlike U.S. and European banks, which suffer from liquidity problems, Korean banks are relatively healthy.”

“Other Asian countries have made all the final preparations,” said another official at the FSS. “Korea would send out the wrong message that its banking sector is not fiscally secure if it were not to act in concert with other Asian nations on this matter.”

The new standards demand that lenders set aside more capital to cover losses such as unpaid loans. They effectively triple how much basic capital banks need to hold and are designed to be introduced gradually over six years.

Preliminary figures released by the FSS yesterday showed that the BIS capital adequacy ratio - a key gauge of a lender’s ability to absorb losses - of domestic banks under Basel II averaged 14.09 percent at the end of September, up 0.26 percentage point from 13.83 percent at the end of the previous quarter. The BIS sets the minimum standard at 8 percent.

Banks’ Tier 1 capital ratio, which excludes supplementary capital such as subordinated debts from equity capital, averaged 11.15 percent, up 0.12 percentage point from 11.03 percent at the end of the previous quarter.

“Introducing Basel III [on time] will serve as a good opportunity for the country to improve domestic banks’ credit ratings,” Joo Jae-sung, vice chairman of the FSS, said at a symposium in Seoul on Tuesday. It was attended by over 400 officials, researchers and bankers.

Irrespective of whether Korea suspends its implementation of the stricter banking rules, the financial authorities said they will finish revising related laws governing the supervision of banks by the end of the year. 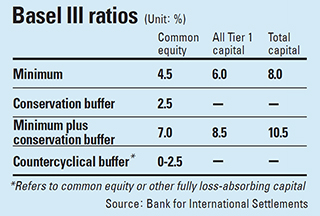 While some critics agree that tougher capital standards in the banking sector are needed to stave off future financial crises, they warn that the new standards could cause lending rates to spike and curtail lending for SMEs if the government doesn’t come up with pre-emptive measures.

A recent report by the Bank of Korea suggested that banks are likely to raise their lending rates to improve their margins while also restricting loans to SMEs to minimize risk as the global agreement requires them to hold more common equity to boost their capacity to absorb losses. This would curtail overall lending, the report said.

“Banks will be more eager to attract investments from rich households and companies to shore up their capital base,” said Ryu Sang-cheol, an official at the BOK. “Banks are likely to beef up their private banking operations targeting the rich. The government needs to hammer out comprehensive measures to improve its financial support for SMEs with the implementation of Basel III.”

The report added that if the BIS ratio were to climb 1 percentage point by 2018, GDP would drop by between 0.12 percent and 0.41 percent due to curtailed lending.