Redknapp starts his QPR reign with a stalemate

Redknapp starts his QPR reign with a stalemate 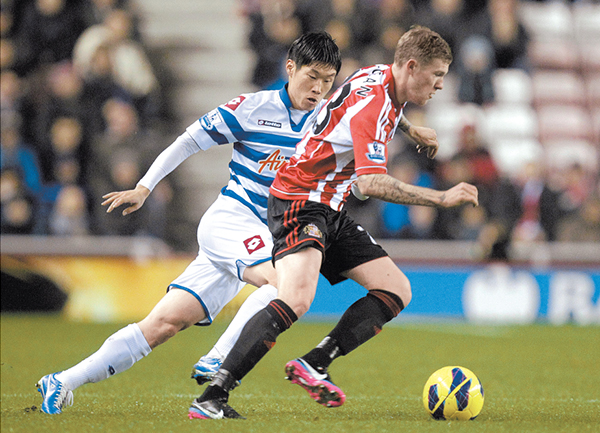 Aston Villa beat Reading 1-0 thanks to a late goal by striker Christian Benteke in another game between teams near the bottom of the table.

QPR remains without a victory after 14 games and is now four points adrift at the foot of the standings.

Villa climbed to 17th on 13 points following their third win of the season, level with Sunderland who are one place above them.

The poor fare on show Tuesday suggests all four teams will be fighting against relegation this season, although QPR will hope the appointment of Redknapp will spark an upturn of fortunes in the coming weeks.

The focus, however, was on Redknapp’s first match in charge of his fifth Premier League club.

“We worked hard and we deserved a point tonight,” Redknapp told Sky Sports.

“There were some good points coming out of that. I felt more optimistic tonight than I did on Saturday,” said Redknapp, who took the reins after a 3-1 defeat to Manchester United last weekend.

“We defended well and denied them chances. I feel more optimistic tonight than on Saturday. I saw enough tonight to think we can go on a small run and keep ourselves in the pack.”

QPR, who have not won in 14 matches this season, remained on five points, four behind Reading.

QPR came closest to scoring in the first half when Jamie Mackie was denied in a one-on-one situation with Sunderland goalkeeper Simon Mignolet and Adel Taarabt’s follow-up shot was blocked.

Rob Green replaced the injured Julio Cesar in the Rangers goal at the start of the second half and the former England keeper made a brilliant save to keep out Steven Fletcher’s powerful downward header from a corner.

“I was hoping we would win the game,” Sunderland manager Martin O’Neill said.

“I know QPR will be buoyed by Harry Redknapp’s appointment but I thought we could create enough to win. There were chances at both ends but it was a frustrating evening.”

Redknapp, 65, who chatted warmly with O’Neill in the tunnel before the game, replaced Mark Hughes who was sacked last week after 11 months in charge.

The former Portsmouth, West Ham United, Southampton and Tottenham Hotspur manager was strongly linked with the vacant England job this year before being controversially sacked by Spurs in June.

Korean midfielder Park Ji-sung played for QPR in his comeback match from an injury-triggered five-game absence before being substituted in the 70th minute.

Villa’s Brett Holman struck a crisp shot centimeters wide early in the second half and Adam Le Fondre should have put Reading ahead when he sent a free header wastefully over the bar.

The deadlock was broken 10 minutes from time when Benteke rose at the far post to head Ashley Westwood’s corner firmly into the far corner of the net.

“We need to win games and it’s a big relief for us. There’s been a lot of people talking about us being in the bottom three and it’s hard to take.”

“He was up against a big lad. It was a fantastic header.”