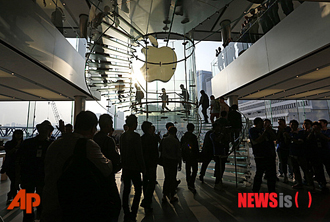 With fewer than 10 days to go before a U.S. District Court judge is due to deliver a final verdict on a patent case between Samsung Electronics and Apple, the iPhone maker has made a concession on one of the six patents being contested by agreeing to shorten its duration.

This came after Samsung claimed that two of the design patents overlap.

Apple notified the Northern Californian court on Tuesday (Pacific Time) that it has filed a terminal disclaimer to shorten the life of U.S. patent No. D618,677 by one year so that both expire at the same time.

“This disclaimer moots Samsung’s motion for judgment as a matter of law, as set forth in Samsung’s reply brief, that Apple’s U.S. patent No. D618,677 is invalid for obviousness-type double patenting over U.S. Patent No. D593,087,” the notice said.

It added that the former patent will not be enforceable beyond the term of the latter. However, Apple made it clear that the terminal disclaimer does not constitute an admission of invalidity.

Samsung claims the two overlap and that Apple has demanded unfairly large damages by taking advantage of what it alleges are two identical patents. Under U.S. patent law No. 101, in such cases, one patent becomes invalid when it outlives the second. The patent relating to the edge-to-edge glass is valid until 2024, a year longer than the one pertaining to rounded corners, but following Apple’s notice, both will expire in 2023. In the United States, a patent is valid for 20 years after it is initially enforced.

Nine jurors in August awarded Apple over $1 billion in damages by recognizing that Samsung had violated six of seven patents contested by Apple.

But Apple’s latest move may not end up affecting the size of the final fine Samsung is ordered to pay given that roughly half of the damages relate to products that infringe only the D’677 patent, according to patent expert Florian Mueller, who runs a blog called FOSS Patents.

Federal District Judge Lucy Koh will consider Apple’s request for an injunction against at least eight Samsung devices at a hearing scheduled for Dec. 6.