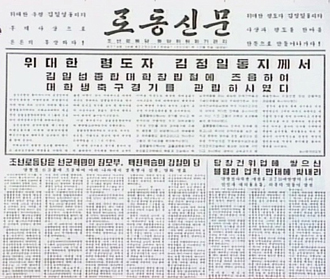 Pyongyang yesterday said it couldn’t care less who wins the South Korean presidential election next month, although it wants better relations with Seoul.

The Rodong Sinmun, the ruling Workers’ Party’s mouthpiece, said in a commentary yesterday that it is a “fabricated allegation” that Pyongyang is trying to involve itself in South Korean politics to influence the December presidential election.

“We don’t care who will become South Korea’s next president,” the commentary said. “That is a matter of the Southern people’s choice.

In a commentary Tuesday, the Rodong Sinmun said “the conservative-led administration should be ended” and described lawmakers of the ruling Saenuri Party as “traitors.”

On Nov. 16, the newspaper called President Lee Myung-bak “a zombie” who had been abandoned by the people when he became a lame-duck.

The newspaper hasn’t mentioned the name of ruling party presidential candidate Park Geun-hye for about 10 days, although it frequently lashes out at her party.

During presidential elections, North Korea regularly denounces conservative candidates in favor of liberals who may revive the Sunshine Policy of engagement of the North.

According to statistics by the Ministry of Unification, the number of mentions of the presidential election in North Korea’s state media jumped from 123 in Auguest to 185 in October.

“Although they don’t mention Park’s name, their position on opposing a conservative candidate doesn’t seem to be changed,” Kim Keun-sik, a professor at the University of North Korean studies, told the Korea JoongAng Daily. “The reason why they say they don’t intervene in Southern politics is because of rising speculation that the North is preparing a military provocation ahead of the election such as a missile launch. That’s what they are denying.”