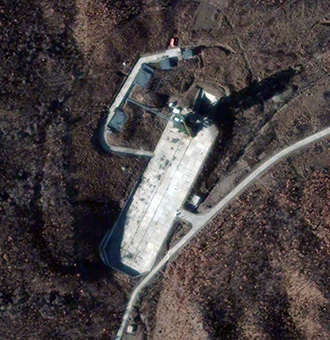 WASHINGTON - The U.S. government remained guarded Tuesday about multiple reports that North Korea appears to be working toward another ballistic missile test.

The U.S. attitude marks a contrast with continued intelligence leaks by South Korean and Japanese officials on Pyongyang’s missile activities.

“I’m obviously not going to comment on intelligence issues,” State Department spokeswoman Victoria Nuland said at a press briefing. “I’m talking about any intelligence we might have about any DPRK intentions.”

Nuland went on to emphasize that Pyongyang is banned from any activity tied to ballistic missile launches under UN Security Council resolutions.

“We would, of course, again take this opportunity to remind the DPRK of the UN Security Council statement of April, which explicitly demanded that the DPRK not proceed with any further launches using ballistic missile technology,” she said.

“After the long-range missile parts were transported to the Dongchang-ri missile launch site early this month, apparent signs of preparations for a missile launch were spotted,” a military source said, requesting anonymity. “(The South Korean military) is judging that there is a high possibility of (the North’s) firing off the missile between December and January.”

It remains to be seen whether such reports, based on intelligence leaks, will affect the results of South Korea’s presidential elections in December. Park Geun-hye of the conservative ruling party and Moon Jae-in of the liberal opposition party are locked in a tight race.

“North Korea’s preparation for a long-range ballistic missile launch in the coming weeks is just another example of the Kim regime’s anti-peace agenda,” she said in a statement. “Pyongyang’s decision to move forward with its preparations for this launch is unacceptable and a flagrant violation of UN sanctions.”

Ros-Lehtinen claimed the failure of the Barack Obama administration’s Feb. 29 deal with North Korea has become apparent and she demanded stricter sanctions on Pyongyang.

Under the so-called Leap Day Deal, the U.S. agreed to ship 240,000 tons of food aid to the North. In return, Pyongyang promised to suspend some of its nuclear and missile programs and allow the return of international inspectors to its main nuclear site.

The agreement broke apart when North Korea fired a long-range rocket in April.

“We cannot be fooled again by a dictatorship that diverts all of its resources to building a nuclear arsenal at the expense of its own people,” Ros-Lehtinen said.