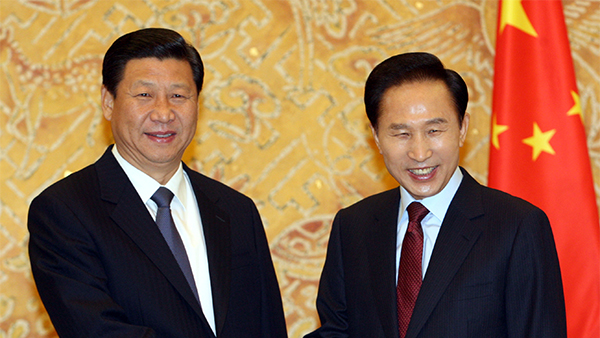 The Korean economy has become too reliant on China. About 24 percent of its total shipments head to China. The taste of Chinese consumers can affect or change industrial and business activities of Korean companies. After running at a galloping pace for more than a decade, the world’s second-largest economy is slowing down. The Chinese economy grew 7.4 percent in the third quarter, decreasing from the same period the previous year for the seventh consecutive quarter. Exports to China naturally took a blow. Korean exports to the country that grew by double digits annually on-year recorded zero increase for the first nine months.

A new leadership under Xi Jinping was launched in China at a crucial turning point that calls for different direction to sustain prosperity at home and help drive the global economy. What are prospects of bilateral trade and economic cooperation under the new leadership?

We can take a cue from the Chinese economic data. The Chinese government injected various stimulus actions since September to prevent a sharp slowdown. It renewed licensing to large infrastructure projects and expanded cash liquidity. In the third quarter alone, the Beijing government endorsed pork-barrel projects worth 5 trillion yuan ($803 billion).

If the government intends to do so, there is no problem in financing them. It can easily raise funds through state-owned financial institutions. The local governments know how the central government works and proceed with social infrastructure constructions. From the trajectory, business opportunities lie when economic data turns bad in China and risks may arise when the economy runs well.

When the economy returns to a solid recovery path, the Chinese government may intervene and hit the brakes with regulations in order to fend off structural weakening. The best time to do business in China is now when the government is set on rejuvenating the economy.

An external trade environment for China is also favorable for Korean companies. China has been under pressure from protectionist moves and demands for currency appreciation from the United States since the global financial crisis. Anti-American sentiment was fueled after the Chinese learned that Apple pays Chinese workers a paltry $11 to assemble an iPad that sells for $554 apiece. Beijing may be in search for an easier or weaker party to work with. Korean companies are armed with cost-saving technologies Chinese enterprises need to learn.

It is where a win-win business partnership between the two countries can best work. The Korean economy is often said to be “sandwiched” between advanced countries and China. What differentiates the taste of a sandwich is what’s inside.

China, in haste to modernize over 10 million small- and mid-sized enterprises, demands industrial know-how from Korea.

Xi Jinping and his new governance team must redress abuses and dangers from the state-controlled economy and extreme wealth gaps. The work cannot be accomplished overnight. Many believe Xi does not have the leadership and will of Deng Xiaoping, who drove sweeping reforms and changed the path for China at its transitional period. The new president instead is expected to take incremental steps to fix deeply-seated corruptive collusion between bureaucrats and businesses and abuses of authority.

We also need to take a different view on the structural economic problems in China. The polarized income axis provides a wide spectrum of business opportunities. The middle class is deemed relatively thin, but nevertheless number over 200 million in the world’s most populous nation of 1.4 billion. The higher-end consumer market is ever-growing.

The underdeveloped agricultural sector also invites Korean capital and technology. The basic law on cooperatives that takes effect on Dec. 1 paves the way for the establishment of investment cooperatives to seek partnership in Korean technology with rich and cheap Chinese agricultural resources.

Instead of protesting against agricultural opening in the Korea-China free trade agreement talks, Korean farmers can seek aggressive business and investment opportunities in China.

The Chinese economy for the coming decade could pose both opportunities and risks for the Korean economy. The Korean economy and companies can gain traction if they make most of China’s transitional period. At the same time, the local economy must strengthen its fundamentals and resilience so that it can defeat challenges in the process.

* The author is a professor of Chinese studies at the Hankuk University of Foreign Studies.