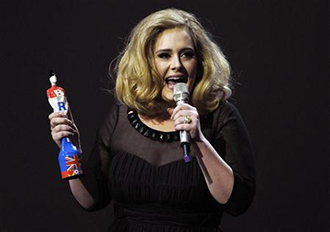 “21,” released in February 2011, produced the hits “Someone Like You” and “Rolling In The Deep” and became the top-selling album of 2011. Earlier this year, Adele swept the Grammy Awards with six, including song, record and album of the year.

“21” became the third album to cross 10 million in 2012, along with Linkin Park’s “Hybrid Theory” and Usher’s “Confessions.” But it is the only album to reach the milestone in less than two years in the last decade, Nielsen said.

“What an incredible honor,” Adele said in a statement. “A huge, huge thank you to my American fans for embracing this record on such a massive level.”

“21” will receive the diamond certification from the Recording Industry Association of America, marking its 10 million milestone, joining the ranks of albums by artists such as Michael Jackson, The Beatles and Madonna.

“Adele’s unique talent is a gift to music fans, and her success is certainly cause for a celebration of Diamond magnitude,” Cary Sherman, RIAA’s chairman and CEO, said in a statement.

Adele, 24, is enjoying the success of her latest single “Skyfall,” the official theme song for the James Bond film of the same name. It has sold more than two million copies worldwide. The singer also gave birth to her first child earlier this year.

On the Billboard 200 chart this week, R&B star Rihanna scored her first No. 1 album with “Unapologetic,” selling 238,000 copies.

She held off new entries from “American Idol” winner Phillip Phillips, who landed at No. 4 with his debut album “The World From the Side of the Moon,” and country-rock singer Kid Rock, who rounded out the top five with his latest album “Rebel Soul.”