About-face on Ahn too much, too soon

About-face on Ahn too much, too soon 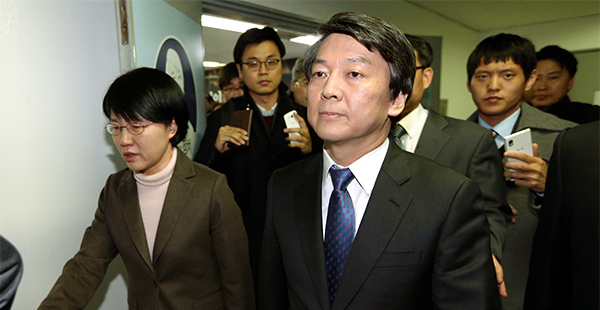 No one expected the presidential campaign to develop like this. Ahn Cheol-soo’s resignation was so unexpected at a time when the opposition Democratic United Party was buoyant with anticipation of a convention bounce from the candidate merger. And the ruling Saenuri Party was nervous.

But the outcome was so unexpected and extraordinary. Thanks to Ahn’s decision, the ambiguous election campaign became a clear choice. It is fortunate that uncertainty has been removed. Of course, Ahn has dropped out of the race, but all the eyes are still on him. The race between Park and Moon is so close that what Ahn does now is likely to be the biggest variable. He may no longer be running, but this year’s presidential election is all about Ahn Cheol-soo.

Before Ahn announced his withdrawal, both major parties were hostile to Ahn. Now, they are working hard to attract his supporters. The Saenuri Party is worried that Ahn might actively help Moon’s campaign.

The DUP is being extra careful. Moon Jae-in mentioned Ahn’s name again in his speech on Nov. 27 in Busan and pledged to “accomplish new politics at any cost.” Shin Ki-nam even suggested creating a new party led by Moon Jae-in and Ahn Cheol-soo. Rhee Mok-hee, who was suspected to have spread the rumor about Ahn’s concession during the merger negotiations, said at a news conference, “We hope to be able to provide the utmost respectful treatment for Ahn Cheol-soo.”

The DUP is full of desperation and earnestness. Some even say Ahn could take charge of the party if he wants. Their attitude has changed so drastically. The relatively neutral senior party leader Kim Young-hwan said, “Have we forgotten what we had done? We should not be asking Ahn for help now.”

The Saenuri Party is not much different. Throughout the campaign, they were busy criticizing Ahn, but as soon as he resigned the attacks stopped all at once. Right before the resignation, they ridiculed Ahn by comparing him to Kokomyun noodle soup, whose popularity died away very soon. And they raised allegations concerning Ahn’s real estate speculation and condemned him as a “fraudulent president.” Ahn’s campaign manager called the Saenuri Party’s negative attacks “Ahn Cheol-soo killing at its best.”

But all of a sudden, the Saenuri Party advocates “Ahn Cheol-soo spirit.” The party reform committee claims it will reinforce Ahn’s aggressive reform plan and reflect his ideas. They say they will realize Ahn’s aspiration for new politics, and 70 to 80 percent of their reform plan will be compatible with Ahn’s vision.

It is understandable that the Park Geun-hye and Moon Jae-in camps want to attract as many votes as possible. But they need to have some dignity first. Both sides claim that they will work toward achieving Ahn’s spirit for new politics down the road. But their motivation is so obvious to the voters.

At the moment, Ahn is not likely to campaign for anyone, no matter how they fret over it. Ahn can also see through the sweet promises. In fact, each party pursuing its own vision for Korean people may be the best way to bring around Ahn to their advantage.

* The author is a deputy editor of political news at the JoongAng Ilbo.